City officials in Jacksonville, Arkansas took a little girl’s therapy dog, a pit bull named Edith, because of the city’s breed-specific legislation.  Please, sign this petition to demand that the city return Edith to her rightful family, and repeal its outdated breed-specific laws. 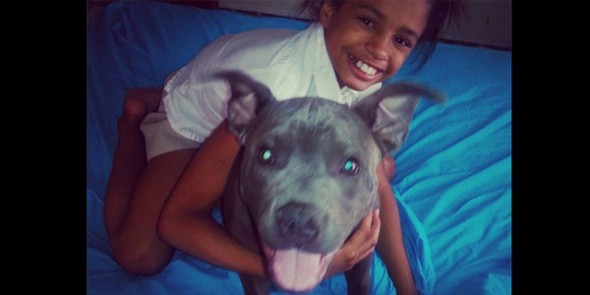 I am a single mother of 3, and I simply can’t afford to pack up my family and move us to a town where pit bulls are allowed.

When my family moved to Jacksonville last year, I had no idea the town had BSL. A neighbor reported that we had a pit bull, and despite the fact that Edith is my daughter’s therapy/service dog, city officials stormed my house without a warrant, seized her, and took her to the shelter.

It wasn’t long before Edith, who was being housed on a cold, concrete floor without her human, became violently ill, vomiting and excreting yellow diarrhea. The shelter returned her to us.

Just 8 months later, Animal Control took Edith again, from the backyard of a friend’s vacant rent house where the dog was staying while pest control was treating the inside and outside of my home. Since then, I’ve been trapped in a legal battle to get her back.

We haven’t have seen Edith since she disappeared from the shelter 3 months ago. On November 3rd, the rescue organization that was supposed to foster Edith until our trial called and tried to change ownership on Edith’s microchip.

Edith is well-behaved and has never hurt anyone. She walks perfectly off a leash, and my daughter has the best time dressing her up – they’re like sisters! I have all of the paperwork that certifies Edith is permitted to come with us to the airport, school or the doctor’s, yet she can’t live in our town because of BSL. It’s a total infringement on our individual rights.

Our next court date it Jan. 11. Please sign this petition to demand the city return Edith to my daughter and repeal its draconian BSL!