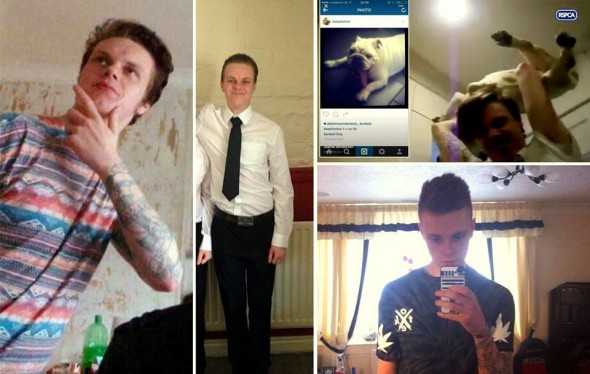 UK residents were completely outraged when a pair of evil brothers were given a slap on the wrist for the egregious abuse of their bulldog, Baby.  Andrew Frankish repeatedly hurled her down a flight of stairs while his brother Daniel filmed him.  Now a petition against their measly punishment has garnered well over 100,000 signatures, and may even reach Parliament.

The video is heart-wrenching to watch.  It is two and a half minutes of perverse pleasure taken in abusing a helpless dog.  Andrew, 22, repeatedly throws Baby down a long flight of stairs and sends her smashing into a gate.  He also swings her around, pile-drives her, and stomps on her head.

His 18- or 19-year-old brother Daniel can be heard saying, “See if we can make it scream any more.  We should throw it down the stairs by its ears.”

Poor Baby barely made a sound, and didn’t even attempt to fight back against her “family” members.  Because of this torture, she became paralyzed from the waist down.  Three months later she was put to sleep.

The abuse took place in October of 2013, but shopper found the SD card containing this video on the floor of a grocery store in February of 2016

Britain is notorious for their paltry sentences, despite their national affection for dogs.  The Frankishes were given only 21 weeks in prison, suspended for two years, a tagged curfew for six months, a small fine, and a life ban on pets.

This punishment is not nearly severe enough to be of any consequence to these monsters, and people are understandably incensed.  A petition addressed to Prime Minister David Cameron was started asking to reconsider the charges against the brothers.  So far, over 130,000 people have signed.

Parliament will respond to petitions drawing over 10,000 signatures of British citizens, and will consider bringing up for debate any that reach over 100,000.  However, these are petitions created on the specific government page (found here).  It is unknown whether or not they will consider a petition from an ordinary site, but hopefully they will recognize the importance of addressing this issue.

In addition to creating the petition, Alex Richardson-Lee also started a fundraiser.  The proceeds will go to the ASPCA to help other abused dogs so at least some good will come of Baby’s suffering.  A Facebook page has also been created to keep people aware of news on this matter.

Apparently police were called in by residents of the Southampton Street, Redcar area who became concerned that the young men were in danger from vigilantes, but unfortunately, no harm has come to them thus far.

If you care to see this appalling video, a portion of it appears below.

How to Raise a Puppy: Recommendations from a Vet
Iams Dog Food
What’s the Best Dog Food for Your Dachshunds?
Nulo
Satos are Puerto Rican Street Dogs, and You Can Adopt One
Iams
Top Dog Food Brands for Weimaraners
Cephalexin for Dogs