Update by the City of Buffalo Animal Shelter. 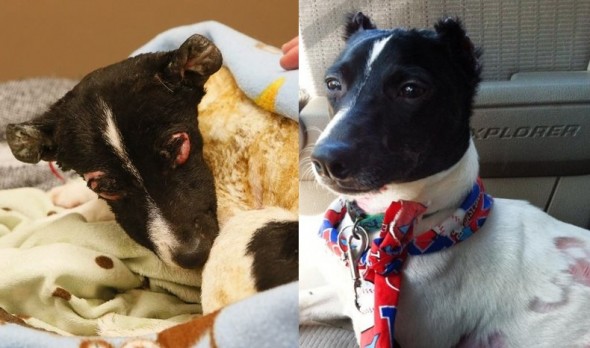 One year ago today (October 29), Western New York was exposed to a story that would pull at their heart strings. A puppy by the name of Phoenix was set on fire by two teenagers. His story made news in and out of the country.

This 10-week-old pup was burned over 70% of his body; his eyes were swollen shut, his ears were burned off and any remaining fur was singed. It seemed like the whole world watched his story and treatment unfold. Daily updates, including his supportive therapy, bandage changes and surgeries, were just a few of the things that gripped the attention of his supporters. Photographs documenting his progress were watched as closely as what outfit he was wearing that day; jumpers and shirts covered his bandaged body. Videos were posted as he learned to walk and socialize with other animals in the hospital and his foster home.

The well wishes, cards and financial and emotional support for this little dog were unbelievable. He seemed to touch the hearts of every person who read his story. Social media made it possible for the world to support this little dog.

The first public outing for Phoenix was at the Paws for Love annual event for the City of Buffalo Animal Shelter. People lined up for hours just to say hello to this brave puppy. Emotions ran high as people hugged and kissed Phoenix, who thought all this attention was meant entirely for him.

Today, Phoenix is a healthy, happy, energetic dog. At 16 months, he is living his life as any other normal dog. He is now a certified therapy dog, he has started obedience training, and he is dabbling in agility. He has overcome injuries that no one thought would be possible. Phoenix is a ‘spokesdog’ for the City of Buffalo Animal Shelter. He brings attention to many other animals in the shelter looking for their forever home, as well as taking every opportunity to educate the public regarding animal abuse and the need for stronger laws against animal abusers. But most of all, he is part of a family that loves him.

Thank you to all who helped this brave little dog through his journey, both past and present. It could not have been done without your help!

There is still a petition circulating to have New York State Governor Andrew Cuomo make tougher laws for animal abuse. The sociopath who set fire to Phoenix is only getting two years behind bars. If you would like to sign the petition, click here.

UPDATE:  Sorry, forgot to include in the story that the teens were caught and arrested.

Adell Ziegler, the teen who burned Phoenix was been handed the maximum sentence in New York state for animal cruelty. He will spend the next two years in prison (we know, not nearly long enough), in addition to the one year he is serving for violating his probation, and is banned from having a pet for the next seven years (again, we know – not long enough).

Ziegler’s nephew, Diondre Brown, confessed to acting as a lookout while Ziegler doused Phoenix in lighter fluid and set him on fire. He was sentenced to six months in jail.