Chester, a black, search and rescue Labrador dog from Argentina successfully located 1.5-year-old Francesca Caporossi. The child went missing on the morning of Tuesday, Oct. 29, 2013, and was found 8 hours later.

The city of Arrecifes, Argentina, was on high alert after an amber alert was released by authorities for the 1.5-year old. Caporossi’s parents had been searching frantically and had contacted local authorities to help find their daughter. 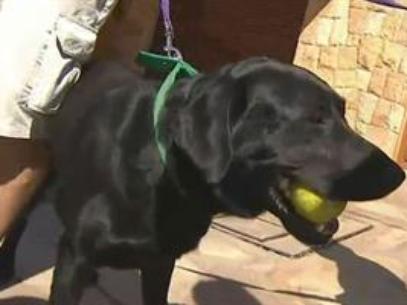 The child’s parents said Francesca was last seen wearing a pink outfit with matching shoes, and after 8-hours of extensive search Chester the dog successfully located her.

The little girl was found seven blocks away from her own home. She was on the second floor of an under construction home. What is puzzling is that the home belongs to Francesca’s father.

The hero dog has experience rescuing people and he always performs his job off leash. His most recent rescues involve locating victims of an explosion, and the body of Tomás Santillán, a teenager murder by his own step-father.

“Chester entered the home and once inside he pointed to the second floor,” a rescue unit volunteer told Terra.

Once rescue volunteers reached the second floor they hear the child’s cries and were able to find her.

“It was very emotional,” said the rescue worker. “[Francesca] was alone, inside a bathroom.”

Once the toddler was brought to safety and reunited with her parents, Chester received the recognition of all involved in the rescue. The hero dog received cheers and a standing ovation from the public.

Police are now investigating if Francesca’s father had any involvement with the child’s mysterious disappearance.