Back in August you read about Pirelli, a puppy from Canine Assistants that was born missing one of his paws.  Now thanks to donations that have been pouring in to help him, that special young pup who is now almost 1 year old is getting a new prosthetic leg similar to the type used by Olympian Oscar Pistorius.

It is believed that in utero the umbilical cord got wrapped around Pirelli’s leg thus preventing his paw from forming, and turning this future assistance dog into an animal that needed some help of his own.  But Pirelli has not let this slow him down one bit, and he has donned the vest for Canine Assistants just the same.  However his role is a little different; he travels to schools to promote a message of acceptance and overcoming obstacles.  Jennifer Arnold, the nonprofit’s founder and author of “In a Dog’s Heart,” said “You could see in Pirelli… something very special.”

This will actually be Pirelli’s second prosthetic, the first one did not work out as well as was hoped for.  This one was created by Hanger Clinic, which specializes in prosthetics for people and their work with animals inspired the recent film, “Dolphin Tale.”   They stepped in to create a carbon-fiber foot looks to be a winner and should allow Pirelli to function normally. 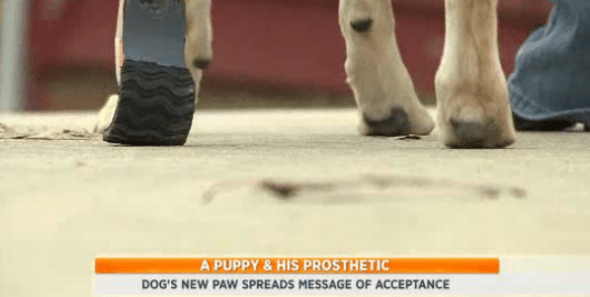 Pirelli is truly an inspiration and has fit into his role beautifully.  In a few weeks he will have his custom built foot and will be able to send his message with even more vigor and enthusiasm than before.  His message is very important says Arnold, “It doesn’t matter what your body looks like, or how it functions, what makes you important as a person is what you are on the inside.”

1 thought on “Pirelli is getting a new leg, and delivering an important message”