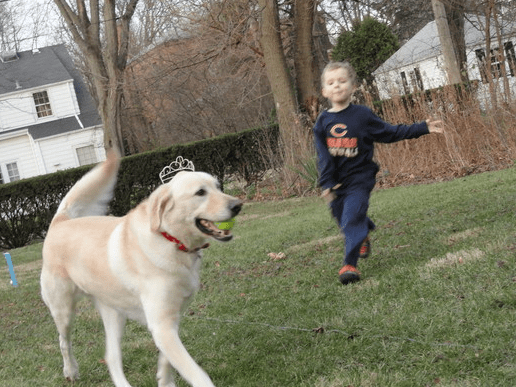 In late October the lives of Vicki Burke and her two sons, Andrew, 8, and Ryan, 4 changed forever when her husband died suddenly.  Now Scoop, a 5 year old lab is  bringing life and smiles back into their home.  Scoop came to the Burke family via a post on Chicago Heights Patch, an online news bulletin.  Formerly named Amarillo, he had been abandoned, left tied to the fence at the South Suburban Humane Society.

Burke has always been a dog lover but her late husband Steve was terribly allergic so having a dog was not an option. “After Steve died, I thought about getting a dog. A dog was never an option when Steve was here—he was horribly allergic. I looked at the listings (online) and nothing really called to me.”  As a youth, Burke recalls an incident in which a stranger thrust a puppy into her arms, and then got into their car and drove away.  That left with her with this feeling, “I knew I couldn’t just go find a dog,” Burke said. “I knew a dog would have to find me, somehow.”

Then Burke’s father mentioned that the Patch sometimes posted ads for dogs that needed homes.  Two days later, Scoop appeared on the site.  “I thought, no. Bad idea. Crazy,” Burke said.  But two days later, armed with a new name, Scoop came home to a house full of new toys.  Oddly though, he was not interested in the treasure of store bought toys. Instead he went under Steve’s desk and unearthed a battered old tennis ball.

“We don’t know why there was an old, beat-up tennis ball in the house because we never had a dog. And he finds it under Steve’s desk,” Burke said. “There are people who believe—and I’m not saying they’re wrong and I’m not saying they’re right—that Steve sent this dog to us. There’s one person who believes this is Steve.”  Whatever the case, Scoop has brought smiles and good energy to the Burke home, just in time for their first Christmas without their husband and father. “He’s just love,” Burke said. “Ninety pounds of pure, unadulterated love.”