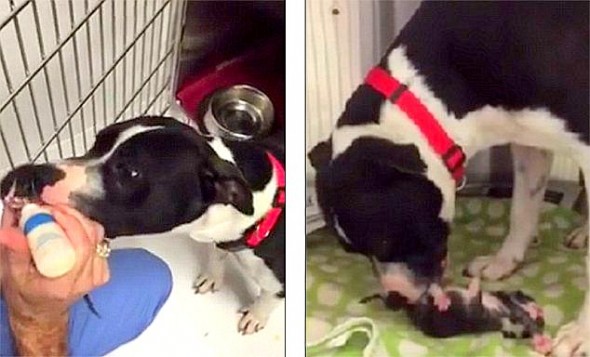 A dog named Pittie had recently given birth to puppies, but now has only one baby – a kitten named Kitty.  She’s been keeping her alive, and even since being rescued, refuses to leave her.  Hopefully they’ll soon find a home together!

A member of Dallas Dog RR found Pittie on the side of the road on St. Patrick’s Day.  As she was being loaded into the vehicle, someone else noticed a tiny kitten nearby.  When she was picked up and brought to Pittie, Kitty latched on and tried to nurse.

Though Pittie had recently given birth, without the demand from a litter of pups, her milk had just dried up.  Had the pair not been found that day and taken to the Mercy Animal Clinic, Kitty would not have survived.

Dr. Rick Hamlin said their rescue was a case of the “stars aligning.”  Kitty began being bottle-fed, but Pittie has continued to mother her.

“Each morning and when I go in to get Kitty for a feeding she is usually snuggled with Pittie.” 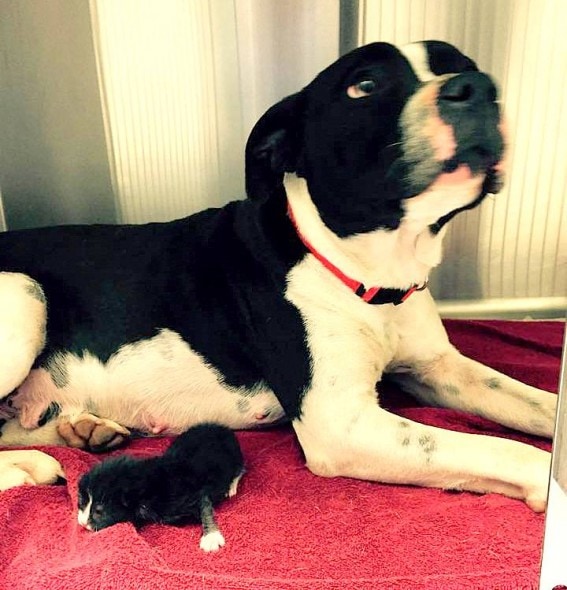 She has a hard time being away from her baby when she goes home with Hamlin at night.

“When I took Kitty out of the cage [that they had been sharing] Pittie started howling,” he explained to ABC News.  “It was the first vocalization she made since she arrived.”

The next morning, Pittie was overjoyed to see her baby and gave her a tongue bath.

“It was a tremendous reunion,” Hamlin said.

Staff members are now working to find them a home.

“We are currently interviewing potential adopters with the stipulation that they go together,” Hamlin said.  “They’ve made it together this far.”