It was during the worst storm California has seen this year that a stray pit bull went into labor.  She had escaped rescue for months, but when she sought refuge from the deluge, rescuers were finally able to get her – and her little ones – to safety.

When Hope for Paws was tipped off about the dog, they immediately made the 3.5 hour journey to find her.  Neighbors had been trying to rescue her for months, but she was too fast.  But now she was vulnerable and wouldn’t leave her puppies. 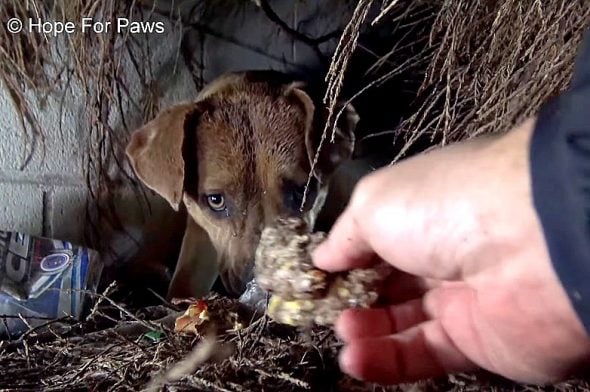 Eldad Hagar crawled down into the den she had made to keep her babies safe.  She looked terrified that something bad would happen, but Eldad offered a gentle hand and earned her trust with food.

Mama likely hadn’t left her litter to find food for herself, and eagerly accepted bits of cheeseburger.  Once she realized that he wasn’t there to harm her, she allowed him to take her puppies out of the den.  As he scooped them up one by one, she gave each of them a reassuring sniff or kiss. 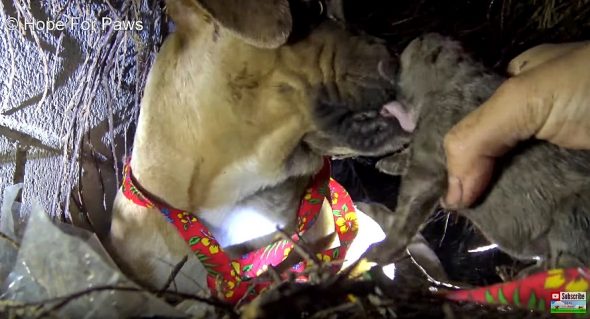 When all the puppies were taken out, then it was her turn.  She was reluctant to leave, but eventually the team was able to get her in the van and to the vet’s office.  The storm had knocked the power out, so they had had to work by flashlight.

Mama, named Rainbow, was happy to be safely reunited with her five girls and three boys, named Bolt, Breezy, Droplet, Flash, Misty, Raindrop, Stormy, and Thunder.  It was clear that Rainbow had not been treated well in a long time, but she eventually came around to being touched and loved on by people.

To adopt this lovely lady or any of her babies, please click here. 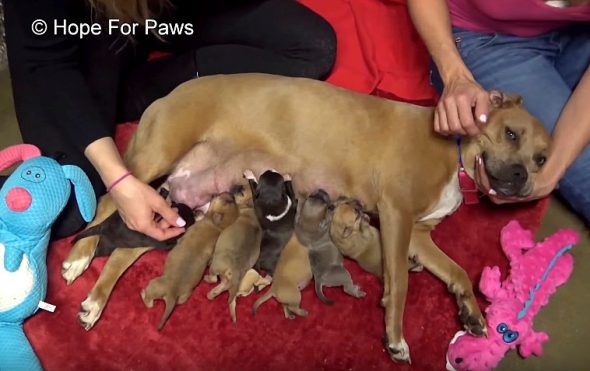