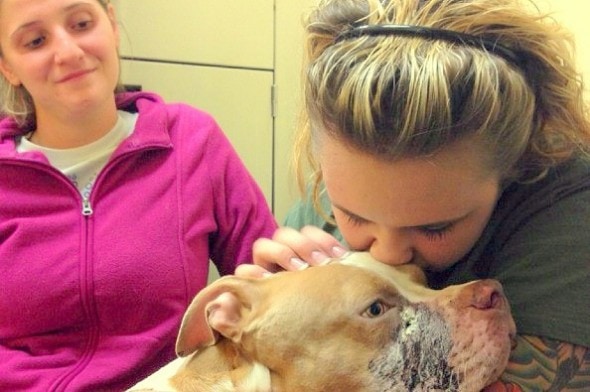 On Tuesday, September 16, 2014, my nephew puppy King was shot by Fairfax County Police during an arrest. The dog was inside when the suspect surrendered himself to the police.  The door was then left open by the officers, allowing King to wander into the street.

He was barking at all the commotion, not aggressively going towards any of the officers or the K-9 unit dogs. The suspect pleaded with the officers over and over to let him put the dog inside, but they refused. Not a single officer tried to grab the dog or let him back into the house.

The officer chose to fire his weapon through his right nasal passage, through his hard palate and tongue, exiting through his neck. Witnesses stated that the year-old pit bull was doing nothing wrong, simply walking around in the road and police shot him.

King is currently being treated in an emergency hospital receiving blood transfusion and in the need of surgery to stop the bleeding. Any little donation would help! Please share King’s story.  The police brutality against not only bully breeds, but canines in general, has got to stop. Justice needs to be served and the police need to be punished just as any other civilian would be. Just because you are the law, does not mean that this is okay.

Please help King in his hour of need.  This senseless violence toward our canine family members has to stop.  We need more people to stand up and demand that the phrase “To protect and serve” covers EVERYONE, dogs included.  If you would like to help King get the medical care he needs, please CLICK HERE.