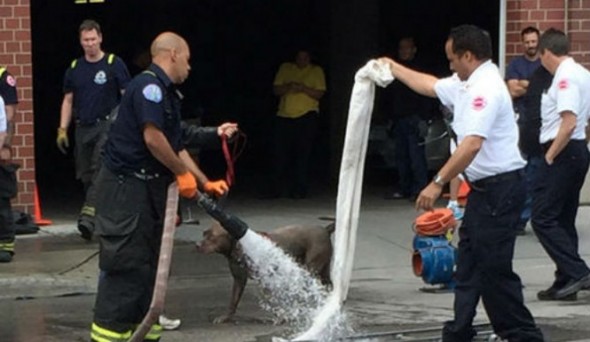 While taking his usual walk with his human in a neighborhood on Chicago’s West Side, when he fell into an open sewer.  The incident took place across the street from a local firehouse, where work had been going on earlier that day.  He was rescued, and even though he’s a bit shaken up, he’s doing just fine.

Theo is a pit bull that resides in Chicago with his human, and is no stranger to the Chicago Fire Department.  He’s a regular visitor at Engine 103, and is friends with Freckles, the firehouse dog.

Theo had been walking slowly behind his human, when the leash he was on went was suddenly and quickly pulled taught.  His human turned around, just in time to see Theo dangling over the open sewer hole.

As if things didn’t seem like they could get any worse, Theo’s collar snapped, and he fell the rest of the way in to the sewer.  In a panic, Theo’s human bolted across the street to Engine 103.  Banning on the door got their attention pretty quick, and after hearing what had happen, they do what firefighters do best.  They sprang into action.

Lieutenant Kenneth Trotter was on the scene and described what was done to rescue Theo:

“The dog hit pretty hard on the cement and there’s a drain pillar in there.  The dog was a little unconscious and started sinking down into the contaminated sludge.  His body was totally engulfed in it.  You could only see the tip of his nose and he was sinking.  put a ladder down into the hole so the dog was able to grab it and stop sinking.  Then we called for more equipment and a team of firefighters.  They set up scaffolding and hoisted him out.  One guy went down and helped push him up.  It took some time and we saved him.”

Theo then got a thorough cleaning, after being in all that sewer sludge.  The firefighters were once again happy to help out, hosing and scrubbing him down.  Theo appeared to be just fine, physically speaking, but one could tell that he was a bit shaken up by the whole thing.  His human had said that he was going to get Theo checked out by a vet, just to be safe.