Jamie Buehrle, wife of the well-known baseball pitcher, Mark Buehrle, has become an example to many for her dedication to the family’s dogs, one of which became news worthy simply because he is a type of Pit Bull mix- a breed banned in Ontario, where her husband plays for the Toronto Blue Jays. She and her husband have both been vocal on behalf of animal rights and rescues. 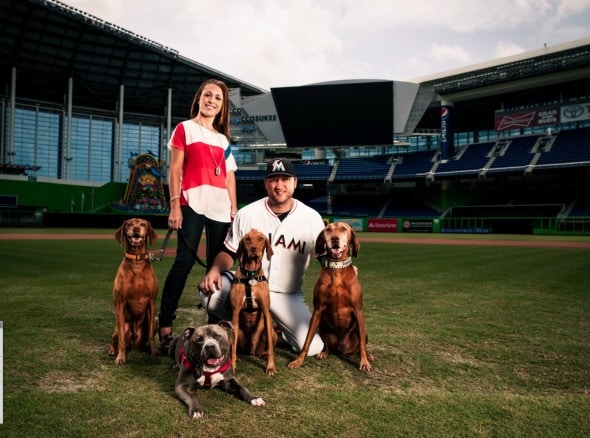 The Pit Bull mix, Slater, was rescued from euthanasia after being pulled from “death row” of a shelter, thanks to a dedicated rescue organization, Hope Rescues.  Jamie came across Hope Rescues in the midst of working with many organization and charities on behalf of dogs and said she was especially impressed with them:

“They pull dogs on the last day of their life from open admission animal shelters. They often pull the black, seniors and pit mixes that some groups find ‘less adoptable.’ They commit to a dog for its entire life no matter what.”

Because they impressed her so much, Jamie chose to invest her time going with Hope Rescues and finding dogs that would otherwise have no chance. It was on one of these trips to an open admission shelter that she would fall in love with the dog that would generate so much controversy and would become the face for advocacy against breed specific legislation.

“While going on a rescue with Jackie…I met the dog that would pick me in the end. I saw a tan hound/pit bull mix that looked so sad and shut down that I couldn’t leave there…I just loved him but already being the owner of 3 big dog, I could not possibly fit another dog to my already hectic life. My family travels a lot and I am home alone with two small kids a lot as well.”

Jamie hoped that Slater would find another loving home before she changed her mind. She visited him a few times before she left for a six week trip. She then heard that a woman had applied for Slater a few weeks later and it seemed like a good fit as the woman had another dog. However, the other dog proved very dominant and Slater was in constant fear of him. In the end, the woman made the sad decision to return Slater.

Slater happened to be returned the very week that Jaime had arrived back.

“I felt like it was fate, so I brought him home to see if he would fit in with my current dogs and household. Perfect Match!!! Slater has not only become a beloved member of our family, but has become a spokes dog for campaigns against BSL. He has been featured along with our other dogs on Adoptapet.com billboards and the cover of Tails             magazine. “

Slater has found a forever home with Jamie and her family and newfound fame too!  Jamie continues to help Hope Rescues and credits their work with bettering the lives of many dogs and owners.

“Hope Rescues has saved so many dogs that have changed owners’ lives for the better. Many adopters are repeat adopters, volunteers and friends after meeting Jackie and Kim. This is why I became a part of this rescue and have never been happier.”

Hope Rescues is an Illinois state licensed, non-profit, no-kill animal rescue. They began in the aftermath of Hurricane Katrina, after observing the suffering of the animals. They began by saving a few animals in 2005, some from the hurricane and others from a shelter  that uses the gas chamber to euthanize.

They have been dedicated to rescuing animals since then. They are committed to rescuing animals even on their last day of life at animal control so that they can have a second chance. Their goals are to promote spay/neuter, stop the use of gas chambers to kill homeless pets, and to educate people on how to treat animals with dignity and respect.