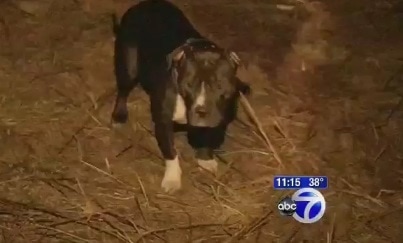 Cara Jones was walking her two-year old pit bull, Creature, but she didn’t want to follow her lead.  Creature was determined to drag Cara into the brush, and her willfulness proved fortunate for an elderly woman with Alzheimer’s.

“So we were standing about here when I heard the sticks cracking,” Cara explained.  “She looked back at me and then barked, and there I saw a figure laying.  She was trying to get up and the sticks kept breaking on her, so she would fall back down.”

Lying on the cold, wet ground was 89-year-old Carmen Mitchell, who suffers from Alzheimer’s.  In the blink of an eye, she had wandered away from her Piscataway, New Jersey home and caretaker.  Over several hours, she meandered into the woods and got about a mile from her house.

“In just the blink of an eye she was gone, and I was so scared because she’s a loving person,” said Rochelle Wason, Carmen’s caretaker.

Rochelle immediately called police, who responded with ground and canine units, as well as a helicopter.

But it wasn’t the police K-9 that found her – it was an ordinary house pet.

He says that she was treated for hypothermia, and because of her condition, has no memory of what happened.  Because of Creature, Luke has changed his opinion of pit bulls.

“I know now that pit bulls are not just as they are described by other people,” Luke said.

“I had a lot of people looking down on me for having a pit bull, and I’m glad that I have her,” Cara said.