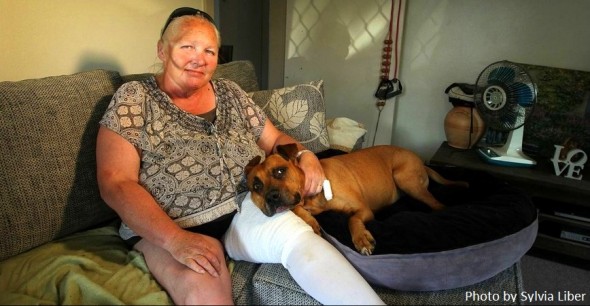 An Australian woman survived a brutal dog attack and said she would not be alive if it hadn’t been for her Staffordshire terrier mix, who risked his own life and stood between his human and her attacker.

Warrawong, New South Wales resident Debbie Patek was attacked when her neighbor’s bull terrier got loose and broke through her fence. She called to her pit bull mix Brian, and he rushed to her defense.

Due to shock, she struggles to remember everything that happened, but her husband is able to provide some details. He was on a different part of the property when he saw Brian suddenly sprint away.

‘‘[Brian] just bolted and I thought ‘what’s he running at?’ and, as I stepped backwards, I realized Debbie was on the ground screaming,’’ explained George Patek, who has hearing loss.

Two other dogs became involved in the fray as he and two other men rushed in to stop the mauling.

‘‘[The bull terrier] was about to clamp down on her throat and my dog ran up there, jammed his front leg right inside its mouth, then grabbed its bottom jaw and hung on,’’ he said. ‘‘Then the other two dogs ran in and started biting as well.’’

George said it took nearly 20 minutes before all of the dogs were restrained. Brian sustained some leg injuries, but is expected to fully recover.

‘‘It makes me feel inadequate as a husband because I couldn’t get there in time,’’ George said. ‘‘If Brian hadn’t got there, she’d be dead.’’

Police arrived and seized the attacking bull terrier. He will likely be declared dangerous.

‘‘Council has received complaints in the past regarding dogs at the Lee Street address where the dog was seized,’’ said a Wollongong City Council spokeswoman.

‘‘Dangerous dog’’ owners must abide by a number of restrictions, including rigid enclosure rules.