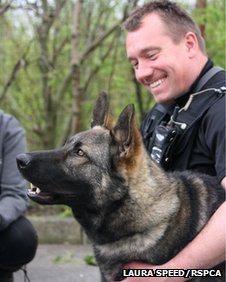 Because of the mistreatment leading to his behavioral issues, there was no hope for this German Shepherd to ever become a family pet. But one police officer saw the potential in Chance, and trained him to be a police dog.

The neglected dog was found living outside of a house in Bradford, UK. He had no food or water, and had only a small, dark kennel for shelter. He was taken from his owners, who were suspected of beating the dog, and signed over to the RSPCA.

Once at the RSPCA, the dog was renamed Chance. It was determined that he was very defensive, and finding him a home proved to be too much of a challenge for staff.

A West Yorkshire police dog handler got a look at him and knew he was the right dog. His disposition made him unsuitable to be safely placed in a regular home, but he could make an excellent police dog.

“One of the police dog handlers was visiting the RSPCA kennels in Tingley and they asked about Chance. It was agreed that we would assess him,” explained PC Mick Kilburn. “He immediately demonstrated some of the raw ability needed to become a general-purpose police dog and was allocated to me, to replace my current police dog who is due to retire.”

But police dogs are more than just partners; they also become companions and family members.

“As a police dog handler these dogs become your life – it’s not a 9-to-5 job. You take them home with you, care and look after them 24/7, they aren’t just a tool that is used by the police. They become your work partner, friend and protector.”

Chance was one of three dogs in training to pass in the ceremony, held yesterday.

“Police dogs remain a very valuable part of the policing team, and although the majority of our dogs are provided by our own puppy scheme, which began in 2006, there is always room for the occasional ‘gift dog’ so long as it meets our high standards,” said Inspector Lorna Meredith, who is in charge of the West Yorkshire Police dogs. “Chance is an excellent recruit. It’s a very happy ending for us all.”

Kilburn said that during his eight years as a K-9 handler, this was the first rescue dog he had gotten.

“I couldn’t be more proud of how well Chance has done.”

“Everyone at the local RSPCA branch is thrilled that Chance is getting this second shot at life with the West Yorkshire Police in such a useful role,” said an RSPCA spokesman. “There are so many rescue animals just waiting for a new home and Chance is a great ambassador for rescue dogs everywhere.”