A daycare manager at a safe haven for homeless women and their children is doing her part to change perceptions of a much maligned breed. 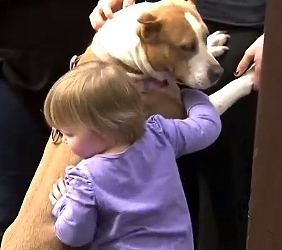 Kira Armbruster is the daycare manager at Fresno’s Evangel Home. Once a week, she brings her 3-year-old English Bulldog, Chubbs, to work her. Chubbs brings his friends to work with him, like Foxy, the 3-year-old pit bull who joined him for a visit this week. Roxy is currently homeless, but is acting as a breed ambassador by teaching children not to fear her, or dogs who look like her.

“A lot of the kids here are scared of everything… I think you saw that today… Whenever there’s a dog that just lets them be… He invites them in. I’ve seen that with a lot of our kids… when Chubbs is here… and sometimes Roxy… it’s just like an invitation to trust,” she said.

For dogs and kids without homes, finding common ground on a California playground is the first step in building that trust.