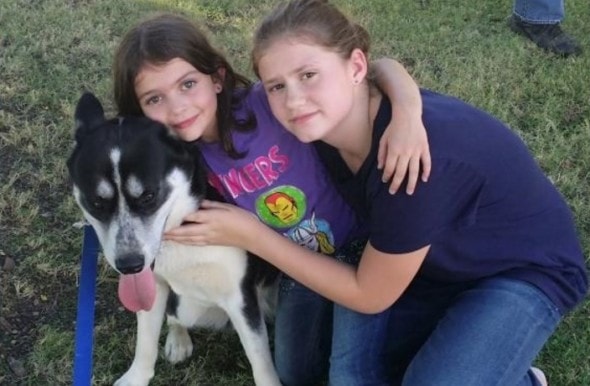 Liam was missing from his family for two years.  In that time, no one reported him as being picked up, and the family he belonged to was devastated.  However, as luck would have it, Liam was found!  The question on everyone’s mind now is how did he make it all the way from Arkansas in the United States, to Ontario, Canada?  That’s an almost 2,000-mile journey!

When Liam was just two years old, the smiley little husky took off on the Payne family.  Billy Payne told news outlets that the family searched for months to find him, but he never turned up.  No one had seen him, and no one picked him up and took him to any of the local shelters or animal control facilities.  His daughters were heartbroken.

Even though Liam never seemed to turn up, the family didn’t completely give up hope.  They still believed that he was out there somewhere, and hoped that whatever happened to him, he was alive and well loved.

A few days ago, fate smiled on the Payne family and on Liam.  A good Samaritan came across Liam, who picked him up and took him into the Inland Valley Humane Society in Ontario, Canada.  That’s correct!  Liam was found, alive and well somehow, almost 2,000 miles from home!

At the humane society, Liam was scanned for a microchip, and he did in fact have one.  The best part of it all is the fact that the information contained on the chip was still valid, and it wasn’t at all difficult to get in touch with them.

When the Payne family got the call that Liam was found, Billy Payne as virtually speechless.  As he relayed the good news to his daughters, one was in complete shock, and the other jumped up and down yelling, “YES! I knew it!”

Now, the task of getting Liam home to his family is in question.  The family does not have the money to have him flown back into the US, and home to Arkansas.  They are asking for help in getting Liam home, and back to his family.  They are getting some help from the Inland Valley Humane Society, but there’s still a bit more to go in an effort to get him home.  If you can, please consider helping Liam and his family have a happy reunion.  If you’d like to see more, click here for the Facebook page, or click here for the main page.

5 thoughts on “Please Help Liam and His Family Have a Happy Reunion!”