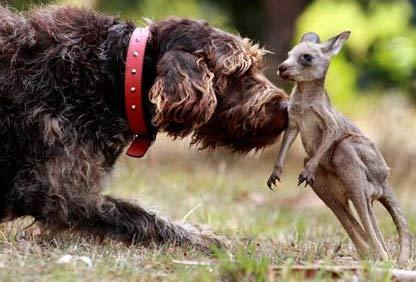 Rex is a German pointer/Wirehaired pointer mix who was ten-years-old when he saved a baby kangaroo.  The baby kangaroo’s mother had been found by Rex’s mom Leonie Allan.  The mother Kangaroo looked as if it had been struck by a car and was dead on the side of road they usually take on their early morning walk together.

After Rex and Leonie got back home, Leonie went about the rest of her day as normal.  Rex, for whatever reason, decided he would go back to where he’d come across the kangaroo earlier that day.

When Rex got back, much to Leonie’s surprise, he had a baby kangaroo with him.  He had brought it back home and presented it to his mom, who was working in the garden outside.

“Later, I was working out (in) the front yard and he started pointing.  I was worried he’d found a snake and called him back, but when returned he dropped the joey at my feet,” said Leonie.  “He obviously sensed the baby roo was still alive in the pouch and somehow had gently grabbed it by the neck, gently retrieved it and brought it to me.  The joey was snuggling up to him, jumping up to him and Rex was sniffing and licking him.”

Unfortunately, Rex was unable to keep his new found friend.  The Jirrahlinga Wildlife Sanctuary is going to be temperoary housing for the kangaroo, until he is older, and better able to take care of himself in the wild.

1 thought on “Pointer Comes to the Rescue of Baby Kangaroo”