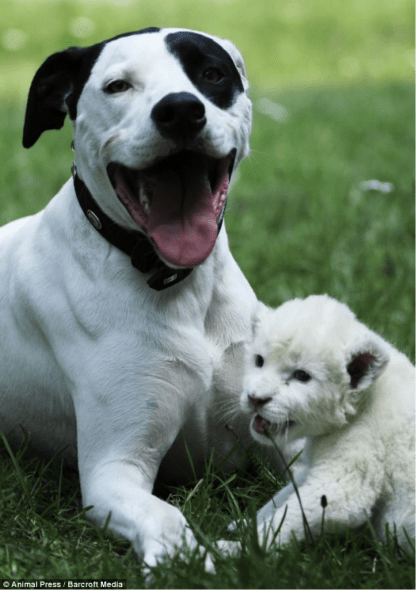 A male pit bull mix dog, called Lejon, has shocked owners and zoo staff by becoming the stepfather of a highly endangered white lion cub called Jojo. The youngster had to be removed from his mother to treat a naval infection. When caretakers attempted to reintroduce the cub, the mother immediately rejected him.

“He needed to be removed, because the mother would have killed him, or he would have starved to death” said  Jeanette Wurms, the zoo keeper who is responsible for the white lions.  “I had to take the decision to hand raise the tiny cub, to give it a chance at life”.

Jeanette added “He is being fed by me, and gets the paternal companionship he needs from Lejon” She goes on to say that “Lejon is so patient… Jojo scrambles all over him, jumps on his head, bites his fur. But he doesn’t mind – he’s a very patient surrogate.”

The tiny cub is just three weeks old, but already he and Lejon are inseparable. Lejon provides the companionship and play the cub needs, as well as someone to snuggle up with.