On July 11, 2013, a Mansfield, Ohio, police officer and a Mansfield News Journal reporter rescued a Corgi trapped in debris near a creek on West Sixth Street. 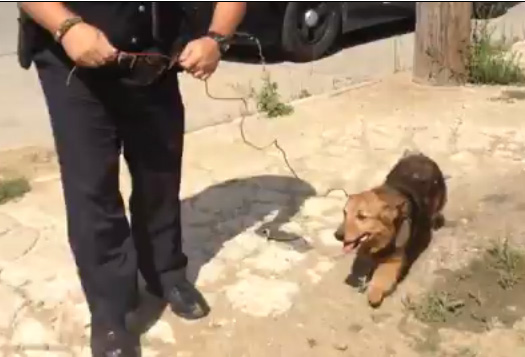 The trapped dog was reported by nearby home owner Henry Heal. Heal and his family had just returned from vacation and heard a dog barking in the vicinity of the creek.

When authorities arrived, they realized the dog’s red plastic chain was tangled around debris near the creek. The chain was caught in such a way the dog had little room to move or reach the creek to drink water.

According to Officer Jered Kingsborough, it is not clear if the dog was trapped there by accident or left behind deliberately. The dog was found with a collar but no tags, and neighbors think the dog is not from the area.

“I see dogs chasing ducks up and down this creek all the time, so maybe it got caught,” Heal told Mansfield News Journal.

The dog is currently at the Richland County Dog Shelter and Adoption Center. If anyone recognizes the dog or knows of a similar dog missing they can contact the shelter at 419-774-5892.

The reporter caught the rescue on video, you can watch it here.