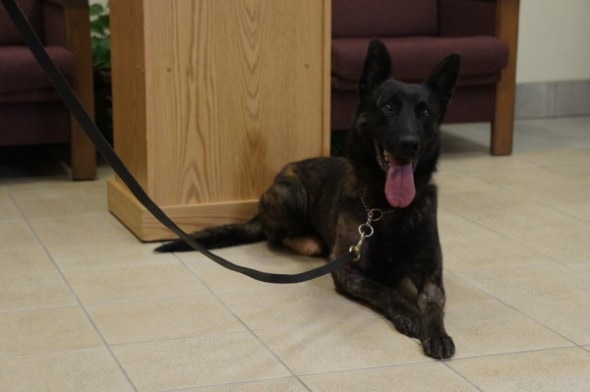 Ranger was assisting with a domestic disturbance call on Monday when the 2 ½ year-old Dutch Shepherd K9 was shot in his right shoulder. An outpouring of concern from the community and other police officers has poured into the California Highway Patrol office in Banning for Ranger. Ranger is recovering well and appeared at a press conference on Wednesday.

When a barricaded suspect, Chandler Cardwell, wouldn’t respond to officers Ranger attempted to get the man to come out. Cardwell shot Ranger in the right shoulder. The bullet exited through his knee, struck the ground and sent fragments into both of his rear legs. Caldwell continued to refuse police orders and was threatening to kill his wife.  He was shot and killed by SWAT officers.

Ranger was taken to the veterinary hospital where one of his toes had to be amputated. Ranger will take about another month to fully recover from his injuries. “He’s doing good. He is still friendly with me. He still wags his tail when I see him. He still wants to chase a toy even though we are keeping them away from him,” said Ranger’s Handler Officer Bryce Murrill.

After Ranger has healed he will be placed on training status and tested to see if he can return to work. “Some dogs turn up gun-shy and other dogs don’t,” said Murrill. “Ranger is a work dog. He stays that way because he has a job to perform for the Highway Patrol. He’s a great dog. We would hate to see him not recover. Ranger is going to make that choice, not us.” If Ranger is unable to return to the force Murrill will be adopting him.