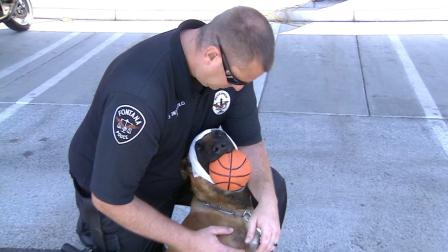 A California police dog named Jaris is recovering after he was thrown out of a second-story window by a parolee.

Police arrived at the Fontana, California home of parolee Bryan Bills on Sunday to take him into custody. A woman who answered the door said Bills was not home, but then an officer spotted Bills trying to climb out of an upstairs window. Bills refused to obey and surrender to officers so Jaris, a 6-year-old Belgian Malinois, was sent into a room where Bills was hiding.

When Jaris entered the room he lunged toward Bills who used the dog’s momentum to throw him out the window. “Jaris was not able to stop himself and fell to the concrete below,” said police.  When Jaris got up after his fall he was bleeding from his nose and staggering.

Officers rushed Jaris to an emergency veterinarian.  He had a large gash on his head and underwent testing for brain damage. His diagnosis was looking good, but on Tuesday officers noticed more swelling on his nose and bulge on his forehead. “As much as we thought he was out of the woods, he’s not,” said police Sgt. Tom Yarrington. Jaris will be returning to the veterinarian on Wednesday for further examination.

Even after Jaris was rushed away from Bills’ home, he continued to resist officers. He was eventually detained and arrested on suspicion of injuring a police dog as well as several other charges.