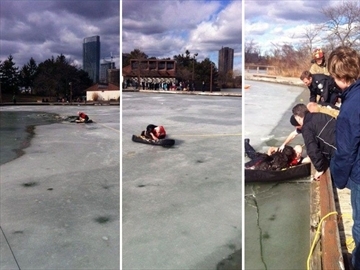 A police officer from Toronto risked his life and injured himself when he rescued a 100-pound Newfoundland puppy from a freezing pond.

Lynne Godfroy was walking her newly rescued puppy Lucy last Saturday afternoon when Lucy took off after a flock of ducks. “All of the sudden she just went for these ducks and she took this flying leap onto the ice,” said Godfroy. “I just thought she was going to go right through – she weighs 100 pounds.” Lucy didn’t break through the ice until she was out in the center of the pond.

Several seconds passed before Godfroy saw Lucy’s head pop up out of the water. As Lucy flailed Godfroy watched in tears and called 911 for help. The first officer to arrive on scene was Constable Greg Vanderhart; about 30 minutes after Lucy first went into the water. “Lucy was howling, and crying and clinging on to the ice with her fore paws. Her nails were very visible, dug in deep to slippery ice,” said Vanderhart. “She was in the fight for her life.”

Vanderhart and a few other officers quickly came up with a plan to save Lucy. Vanderhart put on a life vest and tied a rope around his chest. Using two rear seats from a police cruiser as flotation devise the only thing Vanderhart needed was someone strong enough to be able to pull him and the 100-pound puppy once he reached her. Luckily, Constable Joe Kaszca, a former Toronto Tug of War team member, was on the scene. “I looked at him and immediately knew we had an ace in the hole here,” said Vanderhart.

With Kaszca at the other end of the rope, Vanderhart ventured out onto the ice using his car seats. When he reached Lucy he pulled the large puppy out of the water. “She was struggling to climb towards me and I asked her ‘come on girl, come on girl.” As Vanderhart pulled Lucy out of the water he felt and heard his right bicep pop. Luckily he had Lucy safe and the pair was hauled out of the pond.

Godfrey was extremely thankful and rushed to get a cold and shivering Lucy to the vet. Lucy would make a full recovery and be back to her normal puppy self in just a few hours. The recovery for Vanderhart will be much longer though. The pop he heard while pulling Lucy out of the water was his bicep separating and another muscle tearing. He underwent surgery this week to repair the torn bicep and doctors expect it will take a minimum of 15 weeks for him to recover. For Vanderhart it was all worth it. “She’s a sweetie,” he said. “Although I’m going to miss riding my motorbike this spring, it’s worth it to know that Lucy will be free to enjoy the sun and the beach – without the ice.”