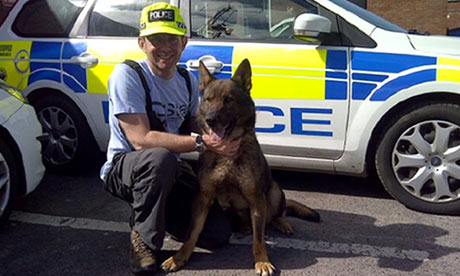 When a Mercedes was stolen police dog Troy didn’t give up on finding the thief. He led his handler through the woods, fields and even over a fence before finding the thief two miles from where the stolen car was dumped.

Troy and his handler PC Jim Harrison arrived on the scene twenty minutes after the stolen car was dumped, but Troy went right to work. ”Tracking is his best skill and he’ll go on and on,” said Troy’s handler. Troy was determined in his task and led Harrison on an impressive chase. “We went over a fence and through wood and over fields and it’s a real challenge keeping hold of him,” said Harrison.

Two miles later Troy found the suspect. A 28-year-old man was charged with the theft of the Mercedes. Troy’s accomplishment was praised by the police force and particularly his handler. “I’m very proud of his drive and determination,” said Harrison.