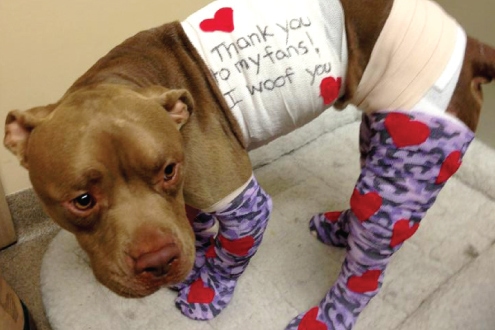 A surveillance image of the vehicle used to dump Indy in an alley to die has been released, and police need your help identifying the abuser.

Indy, short for Independence, had fireworks strapped to his legs and lit on July 4. He was then yanked out of the flatbed of a white truck and abandoned in an alley between Kittridge and Hamlin streets in Winnetka, a neighborhood in Los Angeles.

A witness saw what happened and confronted the man, but the driver fled. The truck is described as a possibly late-80s model, white Toyota pickup with dark stripes on the side, large off-road tires, a sunroof and an extra-cab window. The witness said there was a toolbox on the flatbed. 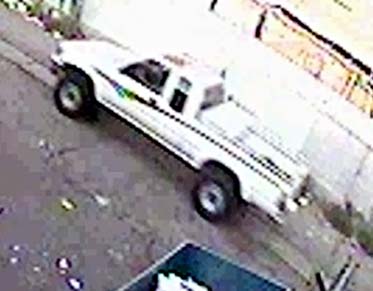 Indy is recovering well, considering the extent of his injuries.

“He’s got a good prognosis for the long term,” said Dr. Daniel Slaton. “It’s just the walking and things like that – he’s going to have some disabilities.”

He might have trouble walking, but he should have no problem finding a home. His story has gathered so much interest that Ellen DeGeneres and wife Portia de Rossi recently visited Indy at Westlake Animal Hospital. Photos of the visit were posted on the S.T.A.R.T. Facebook page with the message, “Indy gave TONS of kisses to let us know he is on the mend.”

Though he is weeks away from as full a recovery as he can have, many have already expressed interest in adopting Indy. S.T.A.R.T. staff will likely have meet & greet sessions to determine who will be the best match for Indy. Those who are not selected should keep in mind that there are plenty of other dogs in need of good homes, not just the ones who make headlines. The ones who aren’t in the news are quietly put to sleep because there is no one fighting to adopt them.

Anyone interested in donating to Indy’s recovery fund may visit here. Checks should have “Indy” written in the memo, or leave blank to allow funds to go to other dogs who need medical care.

Rescuers are willing to offer a $15,000 reward for the arrest and conviction of Indy’s torturer.