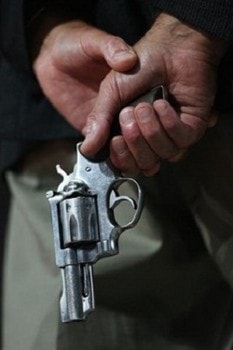 On April 3rd Police were responding to a “shots-fired” call when they shot at a pit bull that got out of the house and came running toward them.  Now the police department has offered to pay $2100 of the $4500 vet bill for the family who owns the dog.

When officers approached the home, the dog was barking loudly so the owner put him in a back room so she could speak to police, but failed to secure the door.  When she opened the front door the dog managed to escape and ran toward the officers prompting them to shoot.  Muncie police Chief Steve Stewart said that officer Ryan Yeager “fired several shots at the dog as he’s charging at the officer,” striking it several times.

The money will come from a fund that the Muncie Police Department has in place to help cover the cost associated with destruction of property during an investigation by a responding officer.   For example, “We might respond to a call of check on the welfare of someone when, for example, the officer may look in and see a person that looks like they’re on the floor unconscious, so we’ll break the door in,” Stewart said. “So we have the money to replace that door.”

Apparently the owners of the dog were understanding of the police actions and grateful for the assistance they will receive in paying the bill.   The police decided to offer the money because  “Most of us are animal lovers, and that was a family pet,” Stewart said. “It’s unfortunate that things transpired that evening the way they did.”