Emerson tried to break free from his life of neglect and abuse several times, ending up in a shelter each time only to be picked up by his owners and returned to his life of misery.  Finally they decided to leave him there, but the timing was bad. It was Christmas and no one was looking to adopt a homeless pup in need of much costly medical care.

Since he was sick he was placed in an area of the shelter where he was even less likely to be seen by potential families making his chances of survival even lower.  Emerson was malnourished, dirty, and matted to the point that one of his legs had become so infected it had to eventually be removed.  He had only a few teeth left, he shook with fear, and his eyes showed the suffering and sadness he had lived with.  He must have been in almost unendurable pain, yet he did not give up.  Fortunately for him, when he was on the shortlist for euthanasia, along came his fairy godmother.

Annie Hart looked into Emerson’s eyes and knew she had to save him.  She is with the Bill Foundation, a Los Angeles based dog rescue dedicated to saving dogs from dire situations and placing them in forever homes.  The first step was to bathe him and trim his mangy fur, and to handle him with gentle hands to help convey the notion that he was finally safe. 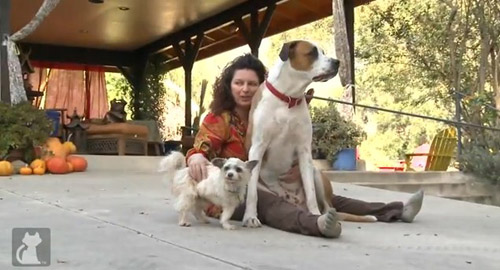 After his leg was amputated and he was no longer in constant pain his true personality began to show itself.  He is affectionate, protective, and playful. He now has a forever home with his animal loving mom Michaela,  who said “I just knew that was my dog” when she saw him.  He gets along well with his new brothers and sisters living on her 5 acre retreat and is finally having the life that every dog deserves and many will never get.