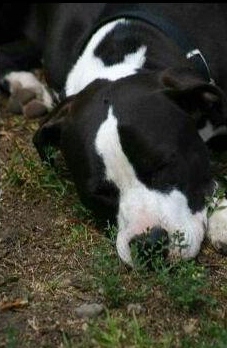 The Commerce City, Colorado police officer who killed Chloe last month has been charged with animal cruelty.  Officer Robert Price was charged with aggravated cruelty to animals, which is a class six felony.

The incident occurred on November 24, when owner Gary Branson dropped Chloe off at a relative’s house while he went out of town for Thanksgiving.  She left Chloe in her garage when she went out shopping, but the dog tripped the sensor and opened the door.  Police received a call from neighbor Kenny Collins, who said there was a large, aggressive pit bull-mix (chocolate Lab mix, according to Branson) wandering around, barking at his windows.  Police arrived with animal control, and Collins’ son began filming the event on his cell phone.

“He’s basically back in the garage or whatever, staying away from the police,” Collins said.

Collins said that Chloe just sat in the garage near her bed for about half an hour while the officers scratched their heads, thinking what to do.  Chloe must have attempted to get back out, because one of the officers used his Taser on her twice, forcing her back inside.  Scared, Chloe tried to escape again, but was shot by Price.  The animal control officer finally got the wounded dog on the catch pole, but Price shot her four more times, finally ending her life.

Collins said that from the video, you could tell Chloe was just scared and trying to run away from danger.

“I totally disagree with it, totally,” he said.  “The dog was not attacking people and that’s not what I said when I called 911.”

Branson is devastated at the loss of his dog, who had been a therapy dog to him since he underwent heart surgery in 2008.

“She was my constant companion pretty much 24/7.  And there’s never been any incidents where she was violent or aggressive,” Branson said.  “She was as gentle as a lamb.  She loved kids.  She loved running around with them, playing with them.  She’d let them ride on her like a horse, bounce on her, pull her ears, and she never once did anything to harm a child – or an adult.  She was just a loving, loving animal who loved attention.  It didn’t matter from who.”

After a thorough investigation, the Adams County District Attorney charged price with cruelty to animals.  The cell phone video, which went viral, has been a key piece of evidence, along with witness accounts.  A necropsy was also performed.  Branson is considering taking legal action against the Commerce City Police Department.

“They had the opportunity to do the right thing – to own their mistake, to apologize for that mistake. And they didn’t,” said Branson’s attorney, Jennifer Edwards.  “So now I think they need to change their ways within that police department.  Obviously, there’s something wrong in the culture there.  In three months, we’ve gone to trial on one dog getting shot, and now we have another one needlessly murdered.  Something has to change.”