Family Reunited with Dog Who Spent 3 Months in the Wild 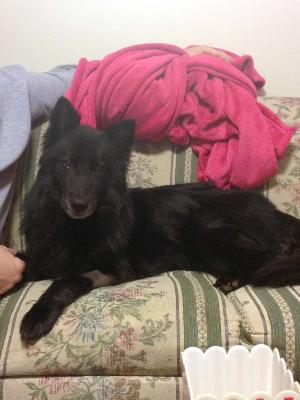 When Paramus, New Jersey residents Francine and Anthony Smith’s dog Princess took off, they never gave up hope of having her return home.  She was spotted many times around Van Saun Park, but it was three months before she was captured.

Francine was on the front porch with Princess and her brother Oreo on September 8th.  The two were playing, and Francine briefly stepped inside to fetch some water for them.  A concerned neighbor rang the doorbell to make sure the dogs were not strays.  Princess had been abused as a puppy and had since become afraid of people, and ran away after being startled by the woman.

The family posted hundreds of fliers and mailed postcards with Princess’s photo.  They received many calls to report sightings, but no one had caught her.  Six weeks after her disappearance, Princess was spotted a mere 10 houses away from home.  The Smiths and their kids began scouring the street and calling her name, but to no avail.

“The worst thing you can do is call their name and run at them,” Anthony said.  “What happens is everybody is calling their name, and other people are chasing her, so she ended up running the other way.”

Employees at the Van Saun Park noticed a dog matching Princess’s picture hanging out near their maintenance facilities.

“Those posters paid off, because the workers at Van Saun Park were seeing her every day, running with the coyotes,” Anthony said.

The Smiths wanted to spend a night in the park so they could catch Princess themselves, but county officials said they weren’t allowed due to safety reasons.  As an alternative, Bergen County Animal Control put food traps around the park, hoping the dog would be hungry enough to fall for the bait.

“It was the day before Thanksgiving when they put the traps out,” Anthony said.  “It was 11 days later when she went into one of the traps.”

On December 2nd, Anthony returned to the park with Princess’s food.  Upon his arrival, he found his much-loved dog already ensnared.

“When I showed up on the scene, I was afraid of how she was going to react,” Anthony said.  “I had her bag of food, and I was able to feed her bowl of food through the cage.  She took it as gentle as the day she left.”

Princess spent her first night out of the wild being monitored at a veterinarian’s office.  She is recovering and working on regaining the 20 pounds she lost, as well as being treated for minor injuries.  She was happy to return home, and promptly reclaimed her spot on the couch.