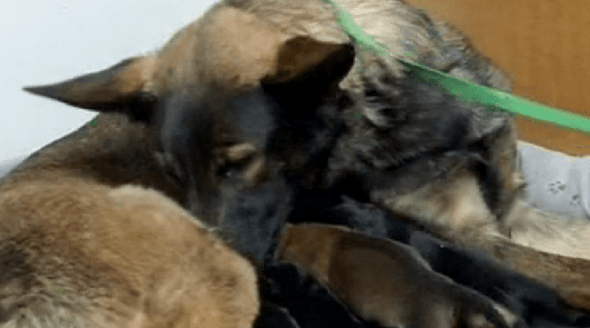 When Police Officer Jennifer Bloom drove by a local park in Newark, California, she was surprised by what she found. A German Shepherd had been abandoned and tied to a park bench. Officer Bloom soon realized the abandoned dog was in labor.

Officer Bloom pulled up to a park and spotted the German Shepherd in obvious distress. Bloom had never encountered a dog giving labor, but did what she could to help.

“You know we go through training on how to help a woman deliver a baby,” said Officer Bloom. “But we never had to deal with puppies.”

Bloom carefully helped the dog into her car and drove her to the Central Veterinary Hospital.

“I heard some puppies screaming in the back and I knew she was actively giving birth to more as I was driving over there,” said Bloom.

Bloom and the German Shepherd finally made It to the hospital they were able to get the dog the help she needed. In total nine puppies were born, though two did not survive. The mother, which the hospital has named Bristol, is doing well and taking great care of her puppies.

Police are investigating the incident as an animal cruelty case. Bristol did not have a microchip or any tags. If no one comes forward to claim her she, along with her puppies, will be available for adoption soon.