Police officer Tyler Hoogerwerf is no stranger to helping people and saving lives.  So on Sunday, when he came across an injured dog with his human on the road, he sprang into action and saved the dog’s life.

Hoogerwerf was in the military, and in 2007 the former paratrooper returned home from active duty overseas.  He had been serving in Afghanistan where he and his platoon were ambushed.  The resulting firefight left one of his good friends and serving mate killed, and Hoogerwerf almost lost his left leg.

When he came home, he became a police officer.  It was something that he had wanted to be even before enlisting in the military.  So, it just seemed like a natural progression for him to join the force.

“Right before I joined the Army, I was set on, ‘I want to be a police officer,’ so that was the idea.”

Since, his record of helping people, and animals for that matter, has been nothing short of stellar.  In 2011, as a passerby, Tyler heroically saved some cats from a fire that was overtaking the Henry County Humane Society in Geneseo, which is his hometown.

“I guess helping people and helping animals is just something I like doing,” said Hoogerwerf. 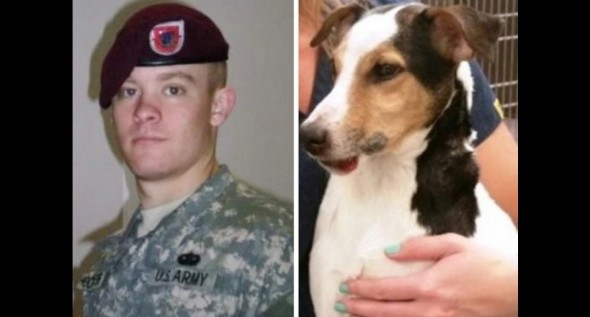 This past Sunday, Officer Hoogerwerf was on his assigned patrol.  While doing so, someone flagged him down, and when he pulled over, he saw why.  Someone’s dog had been hit by a car, and by the look of things, the dog had not survived.

“When I got there, I thought he was dead, honestly, because he wasn’t moving.  But once I saw he’s alive, I said OK, let’s get him some care,” said Hoogerwerf.

The dog is called Jake, and someone hit him with their car while Jake’s human, Travis Herbert, was walking him.  Herbert said that Hoogerwerf grabbed Jake and put him into the squad car.  He got Herbert in as well, and they took off for the nearest animal hospital.

As if things weren’t bad enough for Jake and Herbert, there was the issue of paying for medical services.  It was something that Herbert just couldn’t afford.

Hoogerwerf paid $300 for the medical care that Jake needed.  He didn’t even hesitate, he just did it.  Vets at the animal hospital said that had the officer not got Jake there when he did and wasn’t able to pay for the care, Jake would have been dead.

“I’d be crushed if any of my dogs got hit, as would any dog owner,” said Hoogerwerf.  “I don’t want to see an animal lose its life over something that can be fixed.”

Unfortunately, Herbert and his family couldn’t keep Jake; they didn’t feel it would be right.  They don’t have a lot of money, and wanted to make sure that Jake would always be well cared for, and with a family that can give him the best life possible.  Jake has since been adopted by another family, and is doing very well today.