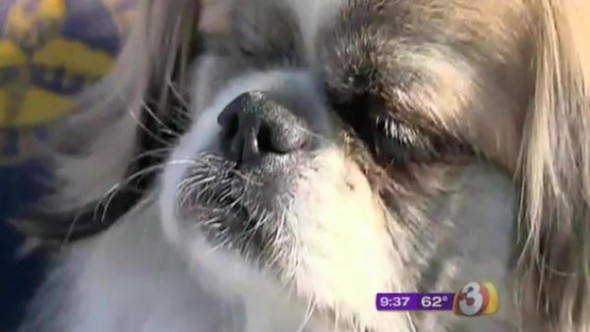 It was an emotional reunion for Jessica Rowe and her dog Buddy on Monday. It had been almost two years since Buddy had gone missing from Rowe’s Arizona home. The reunion happened thanks to the help of two Phoenix police officers.

It was May of 2011 when Buddy disappeared. “We had a monsoon in Mesa and it flew open my townhome gate while we were at work and Buddy ran away,” explained Rowe. Rowe searched for days and then months but couldn’t find Buddy. Rowe was devastated, as was her daughter. “My daughter [who was 3 at the time] is like a social butterfly and so it was really detrimental, almost like losing a sibling, for her, she cried a lot, a lot,” said Rowe.

Then last Friday Officer Don Martin heard something hit the side of his patrol car. “I heard this really horrible sound as if a large stone or some object hit the driver side of my patrol vehicle,” said Martin. When he looked to see what it was he saw a black and white Pekingese. Martin and another officer quickly wrapped up the dog and rushed him to a vet. The officers even paid for the dog’s treatment.

The vet found a microchip revealing that the dog was Buddy and belonged to Rowe. The officers phoned Rowe to give her the good news; her long lost dog had been found. Martin was thrilled to have been of help and to reunite Buddy with Rowe. “Dirty little secret, we all like being police officers, because of moments like this make a difference; this is what you live for,” Martin said as he watched Rowe and Buddy reunite.