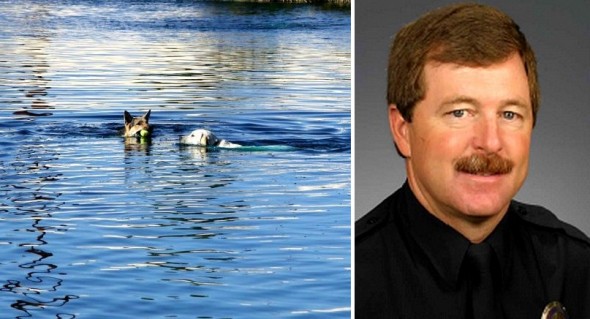 (stock photo of the dogs)

When an officer heard there were two dogs in distress, he leaped into action and did what any good cop would:  he courageously risked his life to save theirs.

This comes from the Grand Junction Police Department in Colorado:

On Thursday, August 13, Detective Ed Prescott, a 21-year veteran of the Grand Junction Police Department, heard a call come out through dispatch that there were two dogs in the canal near 28 ¼ Rd. Although Detective Prescott is assigned to our Investigations division, and doesn’t typically respond to patrol calls, he knew he was close to the area, and decided to respond to see if he could help.

Once on scene, Ed encountered a very distraught pet owner, whose two dogs had gotten loose from her when they saw some ducks and jumped down into the canal to chase them. The dogs had been in the water for several minutes in a spot with a strong current, and they were starting to lose steam. Knowing the additional help was still a few minutes out, Detective Prescott decided to take action before the pups exhausted themselves and gave into the pull of the water.

Using some MacGyver-like skills, he tied two nylon leashes together, hooked them to a nearby metal grate, took off his duty belt, shoes, and socks, and lowered himself into the water. He instructed the dog owner to move up current, in hopes that the dogs would use what energy they had left to swim in her direction, so he could reach them. It worked. Ed was able to grab the dogs, one by one, by their collars and assist them onto the bank of the canal to safety.

The pooches’ owner was incredibly grateful. We at the Grand Junction Police Department are equally grateful to work with someone like Ed Prescott, who values all life, regardless of how many legs they walk on. Thanks, Ed! #ShareGJ