When a dog feels threatened and defensively attacks, there is a right way and a wrong way to react.  Officer Randall Frederick was bitten by a dog who believed she was protecting her small human from an intruder, and rather than hastily react by drawing his weapon and firing, he took the time to calm her down.

There are so many sad news stories involving cops acting cowardly and shooting dogs who spook them that we are often overwhelmed.  Little good seems to come from covering these stories, as they seldom serve any other purpose than saddening both our fans and ourselves.

Yes, it’s important to get the word out there so police know that we are paying attention and will not let their crimes go unpunished, but what’s more important is to pay respect to the officers who excel at their jobs and are the standard to which all others should be held.

Positive reinforcement works wonders on all, whether dog, child, or adult.  So that’s also why we are more than thrilled to share news of the good deeds that many officers do, in hopes that others will get the message that it is better for everyone if they conduct themselves admirably and be the kind of police they looked up to as children.

Last week, Geoff Wightman, his mother-in-law, and his four-year-old son were hanging out at home when a neighborhood disturbance forced him to call the police.  He alerted the dispatcher to the fact that his dog is highly protective of the house.  What took place between Jillaroo and Officer Frederick is best explained by the man who saw it with his own eyes: 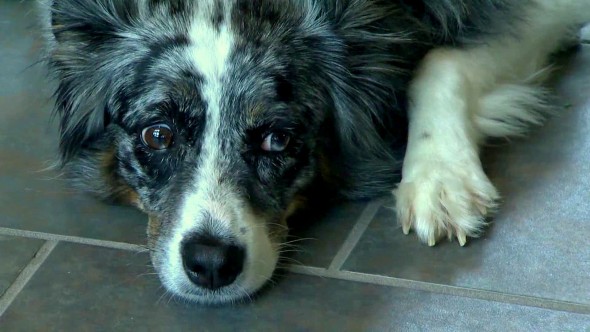 Today, I needed to file a report about a disturbance and the dispatcher who took my report said the patrolman would call before he arrived. We have one dog (an Australian Shepherd) who is very protective of my family.

When the officer arrived and rang the doorbell earlier than I expected, I ran downstairs, but my four year old son was already at the door with our dog. When my son opened the door and started to approach the Officer, the dog immediately put herself between him and the Officer and ended up biting the Officer twice on the leg – not viciously, but still creating bruises and breaking skin. The Officer was slowly backing up and trying to get her to calm down with outstretched hands. Luckily I was there an instant later and separated her.

The Officer then proceeded to take my report about the issue I had originally called about in a very calm and professional manner. I asked him if my dog got him and he said “Yeah a little – I am sorry I should have called first.” (He did not need to call or apologize at all). Protocol necessitated he call in the bite (understandable) so that Animal Control could take a report and do a rabies vaccination check and the standard 10 day in home quarantine – BUT that’s where it ended. The Officer did not strike back against my dog during the incident, did not act disproportionately, he did not file charges or wish her punished, but instead said “She was just doing her job.”

He was absolutely professional and trained and we thank him for it, as we know it could have turned out very differently. I am a grown man, a veteran of both Iraq and Afghanistan, and I am getting emotional over this. We love our sweet dog with all our heart but she is extremely protective, which is a quality in this day and age that is both bad and good with an outcome that always comes down to who is involved.

I tried to look up news stories where police officers had been bitten by dogs to glean some perspective, but all I saw were terrible stories where dogs were being tased and shot by the Police – sometimes with very ambiguous circumstances.

I want everyone to know that in Round Rock, TX we have some pretty darn fine police officers who do a job a lot of the time without much thanks or recognition. This little incident should show you what kind of caliber people we have protecting us and maybe they should get a little credit from time to time for doing things right that nationally seem to be very difficult. I will be shaking all RRPD Officers hands when I see them from now on. 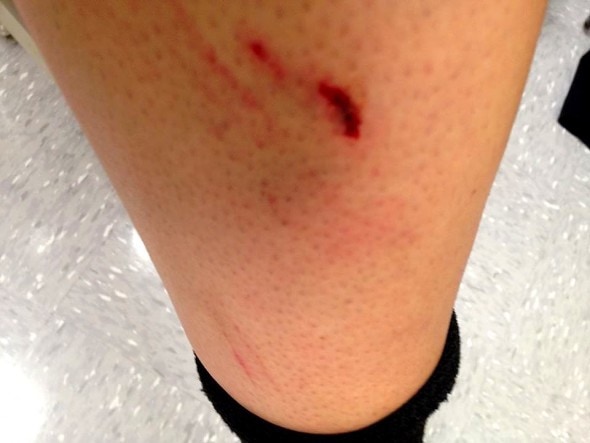 This is an excerpt from the letter Wightman sent to the Round Rock Police Department.  Officer Frederick received a commendation – a Chief’s CHIP Challenge coin – in recognition of his compassionate and intelligent response to the situation.

The department has a program called BARK (Be Aware of Residential K9s) that trains officers on how to understand dog behavior and body language, and how to respond to an aggressive dog.  Pet owners are encouraged to do their part by registering their dogs with the department so dispatchers can alert officers about what kinds of animals will be present before they arrive.

“We talk about different ways to approach animals, to try to keep them from being aggressive toward officers,” explained Commander Jim Stuart.  “And if they do get aggressive, [we talk about] how to de-escalate that.”

Nearly 1,000 households have registered their dogs, and other jurisdictions have become interested in the program, which also includes stickers for officers to give to people to put on their doors so officers will be aware they may potentially encounter aggressive dogs.  Cmdr. Stuart says Officer Frederick’s behavior is a good example for other police.

“It’s about remaining calm, and thinking a problem through rather than overreacting.” 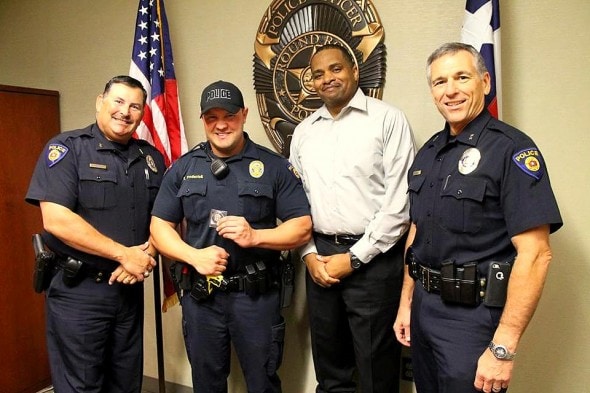 457 thoughts on “Police Officer Soothes Dog Who Bit Him”