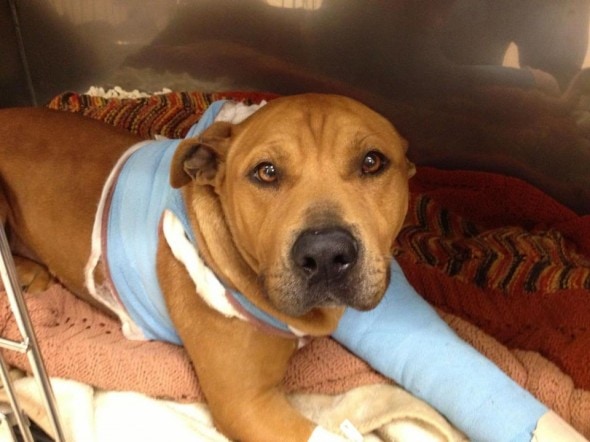 For hours a brown pit bull lay on a sidewalk while people walked by and ignored him, thinking he was dead. The pit bull had been hit by a car and no one stopped to help until three LAPD officers came along and saved his life.

On January 10th, police officers were headed to the police station when they spotted the dog crumpled up on the side of the road. The officers stopped and tried to give the dog water. That’s when residents informed the officers that the dog had been laying there for over five hours. The residents had assumed the dog had died after being hit by a car.

Police officers took the badly injured dog and placed him in their car. They then drove him to the vet where they were informed the dog had a badly broken leg and two fractured ribs, he needed emergency surgery. The vet also found that the dog had a microchip. The officers assumed his owners must be worried about him and so they went to the address listed on the dog’s microchip. The officers were surprised to find the owners didn’t care and didn’t want to have to deal with the dog’s vet bills. They told the officers to just “put him down.”

The officers could not bear to put the dog down though and were horrified saying, “Excuse me! Repeat that! No way! No how!”  They had the owner sign the dog over to them. The dog, named Philly after the officers’ sergeant, was now the officers’ dog. They quickly called the vet and told them to proceed with Philly’s medical care. Philly needed surgery on his leg immediately, it was badly broken.

Philly had surgery to repair his left front leg. The elbow was fractured and the vet implanted an artificial elbow. The vet also discovered foreign matter in Philly’s stomach that had to be surgically removed. The vet removed large plastic pieces and other materials from Philly’s stomach.

Philly’s veterinary bills are piling up, reaching over $7,500 already. Those wishing to help the officers pay for Philly’s care can make donations through their chipin fund. Philly’s progress can be followed on his Facebook page.