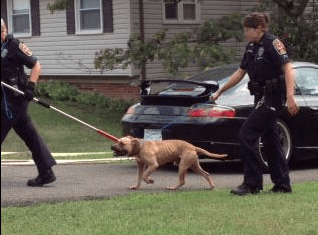 A suspected dogfighting ring has been uncovered in the Alexandria section of Fairfax County, Virginia.

The dogs included female and male adults, as well as puppies. During the three hours it took to remove the dogs from the residence, some appeared frightened while others looked excited to be free of their incarceration.

Neighbors observed that there were often as many as 20 cars parked outside and near the residence.

A device used for forced breeding was also confiscated.

The suspected ringleader in this case currently faces only one charge – being an unfit animal owner.

The charges against him could change as the investigation intensifies.

The suspect’s name has not yet been released, but police are saying that he had recently been arrested, charged and released on an unrelated charge.

The dogs, whose futures are uncertain at this point, have been taken to a local shelter for evaluation.