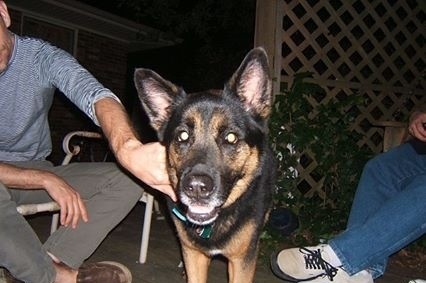 Tim Theall of DeKalb County, Georgia had let his dog Doctor, a 9-year-old German shepherd, out of the back door, similarly to the way he’s done many times before.  He was totally unprepared for what was to come next.  As Doctor ran from the backyard around to the front, Tim followed behind and was startled by hearing two shots, and came around the corner to find Doctor had been shot by the police.

“….And before I turned the corner of the house, I heard two shots; I hear a cop go, “Holy (expletive removed)!’” according to Tim.

Apparently, what had happed was Doctor had run around the side of the home, towards the front, and surprised the officer.  The officer had been in the area investigating a house alarm call, which turned out to be false.

When talking to television stations, Tim wasn’t as angry about his dog being shot as he was by the actions of the officers that followed the shooting.  Tim was told that he would be breaking the law, and facing jail time if he tried to give any assistance to Doctor.  They refused Tim and his wife the ability to take Doctor for treatment for more than an hour.  The police even used their police cruiser to block them from being able to do so.

“No steps were taken by DeKalb police whatsoever to try to save my dog’s life,” said Tim.  “The dog was still alive, clearly bleeding like crazy and the police officer blocked my exit.  Finally he convinced me that I would be thrown in jail if I didn’t just stay where I was.”

According to Tim’s wife, they were told by the officers that they could not move or get help for Doctor because of “due process.”  Upon the arrival of another officer about 20 minutes later, they were informed that “due process” simply meant taking pictures of the incident.

Tim’s wife was then told by the officer that had pulled the trigger that animal control was on the way to help Doctor.  When animal control did arrive, she found out different.

“I find out that animal control was told to come pick up a dead dog and had no idea about the dog needing help,” she wrote.

Thankfully, Doctor survived the bullet he took to the throat, but it required extensive, and expensive oral surgery.  Tim and his wife have set up an online fundraiser, which you can donate to by clicking here.  On the fundraiser site, you can get more information about Doctor, and keep up with his condition.

When asked for a comment, a DeKalb County police spokesperson said he understands the couple’s frustration but the officers kept Doctor at the scene to fully preserve evidence of the shooting.