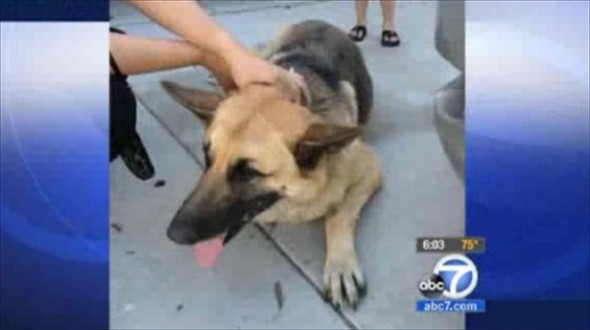 A family in El Monte, California is incensed at their local police after they went back on their word to cover veterinary treatment after shooting the family’s German shepherd.

The Nguyens had called police to report that their 14-year-old son had run away. They asked police to call before arriving so they could make sure their dogs were safely secured. Two officers arrived to the house sometime later, without calling first, and entered the property, clearly marked with a “Beware of Dog” sign.

Security camera footage, set up by father Chi Nguyen, shows that police left the gate open and just walked into the house. One of the officers pet Rascal the pit bull, and went back to close the gate before the dogs got out.

German shepherd Kiki came bolting up toward the gate, then darted back toward the house when she was shot.

“Police thought the dog was attacking, so she shot,” Chi said with the translation by son Winston.

Police offered to pay for Kiki’s medical treatment, but withdrew their offer when they were told it would cost $7,000 to treat the gunshot wound they inflicted. The family was then forced to put Kiki to sleep because they could not afford the cost.

“The incident is being treated as an officer-involved shooting and is under investigation,” a city spokesperson said in a statement. “As such, the city cannot comment on this matter.”

The family is incredibly upset with the officer’s actions and lack of integrity on the part of the the department.

Incidentally, their missing son was located at a friend’s house.