In San Diego, California on the 3rd of January, a small dog was found with multiple rubber bands keeping her mouth tightly closed like a muzzle.  The poor little dog had suffered some pretty serious wounds on her face, and she was a bit underweight.  Now, police and animal services officials are asking the public for assistance finding her abuser, and need all the help they can get.

“The most serious of the injuries are to the left side of the face; they are the deepest and most penetrating wounds. The cut goes across the bridge of her nose and wraps around to the right side,” said David Johnson with the County’s Department of Animal Services. “This magnitude is pretty significant, we normally don’t see things of this nature.”

The rubber bands were on so tightly and for so long, they cut her poor little face straight down to the bone.

“This may have been some sick attempt to keep this sweet dog from barking,” stated Dawn Danielson, the Director of Animal Services.  “However, their actions have caused this poor dog to suffer horrendous pain for a very long time.”

The authorities, after taking into consideration the severity of her wounds, have opened up a full scale investigation.  They are asking the public to come forward with any information in this case.  Specifically, if anyone sees the dog’s story and recognizes the dog is asked to assist with the identity of the dog, or it’s “owner.” 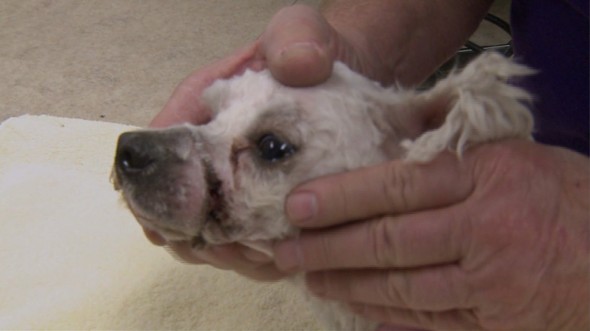