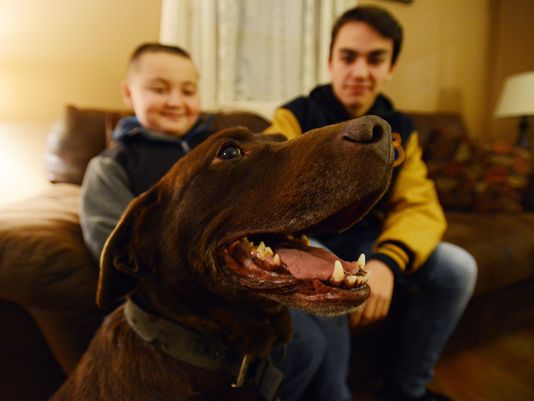 The friends and neighbors in Zanesville, Florida had been searching for Fred.  Fred is a dog that has been missing from his family for about two weeks now.  During the search, a different dog turns up, and this dog was missing for over a year.

Jessie is a 16-year-old chocolate Lab first seen as missing on Facebook.  Someone thought they had found Fred in Dresden, snapped a picture and posted it on Facebook.  The dog seen looked more like a different missing dog but it was never thought the dog in that photo could be Jessie.  However, the resemblance was just too close.  Could it be Jessie, even after all of this time?

Misty Collins, Jessie’s human mom put a call into her ex-husband, George Collins and shared the photo with him.

“Are you kidding me?” was the reaction Misty got from George.

He contacted the woman posting that photo to Facebook, thinking she found Fred.  After testing the dog for several tricks taught to him especially by George, it was determined that this dog very could well be Jessie, a dog no one ever thought to see again.

Misty went out to meet with the dog, and emotions were running high.  Misty hadn’t been around Jessie since divorcing George.  If this was Jessie, would he even remember her?  Misty still didn’t know if this was the right dog.

“My only hope was that he would recognize me and respond to his name,” said Misty.

At first sight, Misty was almost immediately positive she had gone out to see this dog for no reason.  Then, they locked eyes, and something happened.

“When I looked into his eyes, I thought, ‘Oh, that looks like him!’ ” she said.  But Jessie wasn’t responding to his name (the result of what they believe now to be hearing loss) and she didn’t want to ID the wrong dog.

George went out to see the dog the very next day, New Year’s Day.  After seeing him, George was sure that Jessie was found.  Jessie seemed to really respond when the Collins’ sons came out to see the dog.  So, while he definitely had aged a bit, there was some hearing loss, but all things considered, Jessie was in very good health.

“It was heartbreaking,” she said. “It had been over a year. We didn’t know if he was hurt or dead or suffering. You would never guess that a pet would go that far, from Blue Rock to out towards Dresden and still be OK and still be alive.”