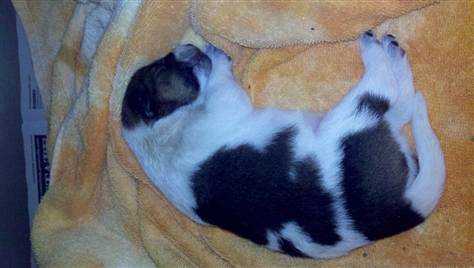 Police officers in Williston, Florida were disposing of evidence per a court order on Thursday when they heard a whimpering noise coming from underground. Officers located the origin of the whimpering and dug out a one-week-old puppy that was head-first in an eight-inch hole.

Luckily the dirt had not been packed down and the puppy managed to create an air pocket below the surface. Williston Police Chief Dennis Strow said, “It did not appear to me that the dog was very long in the hole, less than an hour would be my guess.”

The puppy is so young he can’t even open his eyes yet, because of this the clinic believes him to be around 7-days-old. Caretakers at Levy Animal Clinic have been bottle-feeding the puppy that they have named Tucker. One of the veterinarian technicians at the clinic has already adopted Tucker.

Officer Strow checked in on Tucker the morning after they found him and is pleased to report that Tucker is doing well. He is still disturbed by the find though, “What’s disturbing is that when you look at this fellow you ask, how can he be threatening to anyone?”

The police are still looking for the person who buried Tucker and Strow is determined to find them. “Somebody knows who did this. I guarantee we’re going to follow this one and prosecute whoever did this to the fullest extent of the law,” said Strow. Anyone with information is urged to contact the Williston Police Department at (352)528-4991.