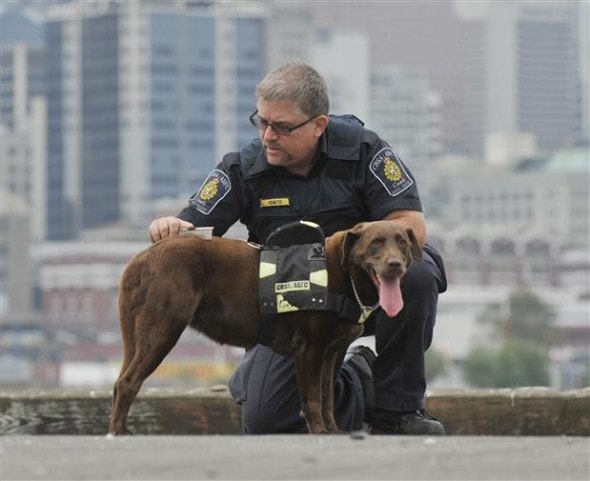 Bailey, a Canada Border Services Agency worker, spent her last day on the job Friday in Vancouver. Bailey is a seven-year-old chocolate lab. Both Bailey and her canine coworker Brodie were laid off due to most recent federal budget. They are among a suggested 19 dog teams to be impacted across Canada by the cuts.

Bailey and Brodie’s coworkers didn’t let their friends lose their jobs without a fight though. More than 95 percent of their colleagues signed a petition trying to save their jobs. Their coworkers even offered to cover the cost of Bailey and Brodie, an estimated $440 per month for each. The officers petition stated, “Please respectfully accept this email as our endeavor to save our beloved and necessary K9s Bailey and Brodie. The following officers donate one overtime shift worked or an extra statutory holiday.” The  officers went on to ask for the Canada Border Services Agency to work with them to find a way to keep the K9 unit.

Unfortunately the petition didn’t work and Bailey and Brodie are no longer with the agency as of Friday. Bailey’s handler Rob Freer will be taking Bailey home with him since she is too old to find a new job. He believes the agency is making a huge mistake by getting rid of their K9 unit. Dogs are more reliable than the machines that will be used now to do their job. Freer pointed to a recent example where an ion scanner failed five times to alert officers to drugs that a dog found on their first attempt.

In addition the K9 units help facilitate commerce in the area. When shipping containers come into the docks in Vancouver the K9 team can quickly and efficiently. When the K9 unit has been unavailable to do this within a few hours of the shipping containers arrival, the load is sent to a warehouse to be inspected manually.  This costs the importer an extra $1500 to $2000 and adds extra days onto the process. “You’re talking almost a quarter-of-a-million a month in what you’re saving real Canadian businesses” Freer stated.

The CBSA is expected to save around $2.2 million a year with these cuts. Even so Freer and many of his coworkers think the agency is making a huge mistake letting Bailey and Brodie go. Freer is also concerned that these cuts are just the beginning of a complete phasing out of the CBSA dog detector program, which was once one of the top 10 programs in the world.

6 thoughts on “Dogs lose jobs due to budget cuts”