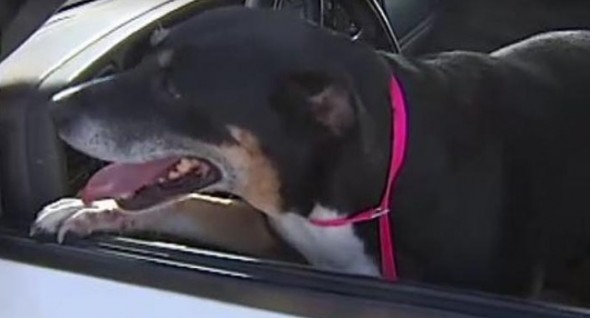 Witchita, KS, was the scene of a dramatic rescue on Tuesday when police responded to a call at the local Walmart. A concerned citizen had reported witnessing a dog locked inside a white SUV in the store’s parking lot.

Using a digital device that device that determine it was 103 degrees inside the vehicle and although they paged the owner inside of the store, they got no response. Police told CBS affiliate KWCH that the animal was panting heavily and appeared to be in distress.

They broke the window of the vehicle to extract the dog, described as a large, black mixed-breed, which was taken into custody by animal control. The dog’s owner later said the windows were cracked and the dog had water.

“The officer that (broke the window) said that (the dog) was falling over, but I’ve had her in my vehicle (on) hotter days than now and she’s never fallen over,” the man said. “And I’ve always given her water and had the windows cracked.”

The dog’s owner says he heard the page for the owner of a white Tahoe while he was inside Walmart and responded immediately. However, he says police had already busted out the window to his vehicle.

The dog was not hurt and was released to its owner later in the day.

Police say the man then called to complain that his SUV window was broken out. Return calls by the police went unanswered.

“We were notified of the situation by a concerned customer and immediately made an announcement over the loudspeaker. We continued paging until the customer responded. We are thankful to first responders for their quick action in rescuing the dog.”

6 thoughts on “Police Rescue Dog from Hot Car in Kansas”