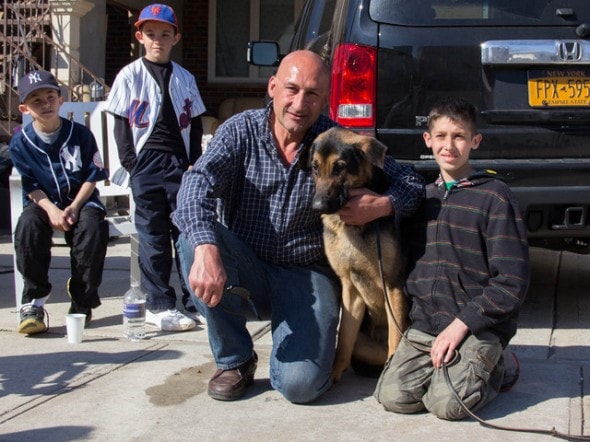 Mikey’s first day in his new home turned into quite an adventure when he got loose and became stranded in a marsh. Police spent two hours rescuing Mikey and getting him home safe.

On Wednesday night Mikey came home to live with his new family in Staten Island. Thursday morning around 7 a.m., Mohamad Awada went to take Mikey for a walk but before Mikey was secured on the leash he managed to slip away. As Mikey ran loose a nearby neighbor started to scream startling Mikey and sending him running further away.

Mikey ended up running through brush and into a nearby marsh. “That’s really where the tragedy of today happened, because this is deep water, filthy-dirty, this is swamps – and after Sandy, this is all sewage,” said Awada. Mikey seemed to have no desire to swim through the filthy water again and back to Awada and the water was too deep and filthy for Awada to get to Mikey. So Awada called for help.

Police arrived on the scene but there was concern that they would scare Mikey even more and send him further into the marsh.  “We didn’t know if [the police] went into the water to go after him that the dog might run away, and then what do we do; he would just disappear,” said Awada. “So the task was extremely difficult.”

Officers Frank Gigliotti and Min Kim put on dry suits and paddled towards Mikey with a water rescue board. At first Mikey didn’t want to go near the water rescue board but the officers fed Mikey some kibble and he began to warm up to them. “He was more nervous of the water,” said Detective Hugh D. Gordon. “But he got friendly with the officers real quick once they made him feel that he wasn’t in any danger.”

Once they had made Mikey feel safe they attached an animal control noose and guided him back across the water to safety. Mikey made it safely across, though he was very dirty. “When they took him out he was like one piece of black charcoal with filthy, dirty sewage,” said Awada, who is very thankful for all the help from the NYPD. “They’re beautiful people, nice people, professionals, you know, the NYPD, my heroes of the day, man. Really, I’m so happy.”