Meet Brody, the world’s most polite pup.  He can bark like any other dog, but unlike every other dog, he can whisper when he’s asked.

“Brody is like a human!” owner Holly Stephens told ABC News. “He is so sweet and smart and he is also extremely polite.”

Holly is a language arts teacher in Woodlands, Texas.  In addition to molding the minds of middle schoolers, she also spends her time training Brody how to do tricks. 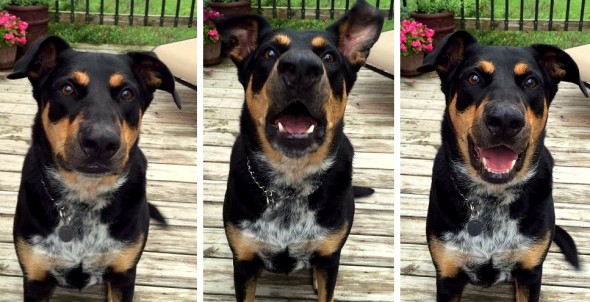 “It’s the teacher in me.  I wanted to be able to tell my students that if a dog could learn to whisper, then they could whisper, too.”

The five-year-old beagle-heeler mix is quite smart, and had the trick mastered in under an hour.

“He is such a fast learner,” Holly explained. “We have always thought it was weird that he seems to understand what we’re saying. He knows what ‘gentle’ means, so I just kept saying ‘gentle’ and eventually he got it.”

This is Brody’s first unusual command, but Holly says she has more training planned.

“I took a vote with my students and they want me to teach him to get a drink out of the refrigerator,” she said.