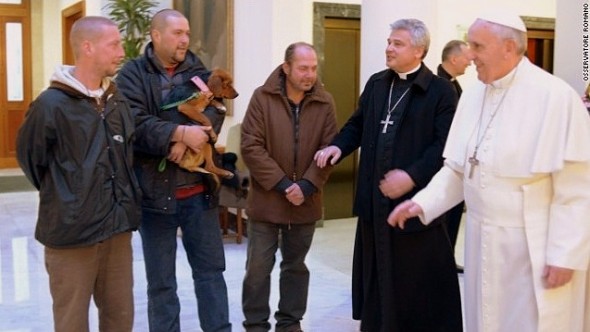 Pope Francis celebrated his 77th birthday on Tuesday by sharing a meal at the Vatican with three homeless men. One of the men’s dog was also welcomed to join the festivities.

Many call Pope Francis “the People’s Pope,” but it seems that he is also “the Dog’s Pope.” Earlier this year he broke papal protocol by blessing an Italian journalist’s guide dog.

“They said that Pope Francis had asked to meet me. He had seen Asià and wanted to see both of us,” Alessandro Forlani said. “I asked for a blessing for my wife and daughter at home.

“He said, ‘and a special blessing for you dog, too.’ He broke the ceremonial rules as my presence on stage with Asià wasn’t previously arranged.” 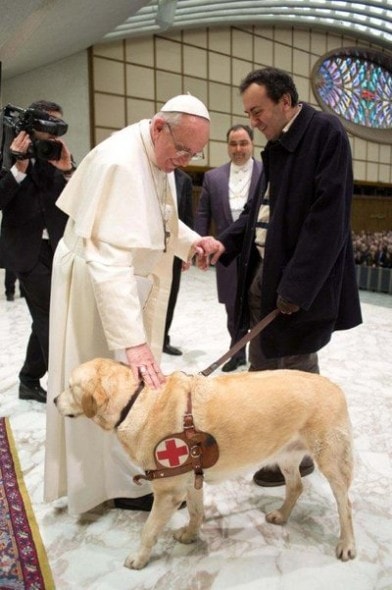 Just days ago, Pope Francis bolstered his down-to-earth, dog-loving reputation by dining with the homeless men and dog. Archbishop Konrad Krajewski noticed them sleeping beneath the portico outside the Vatican’s press center.

“Would you like to come to Pope Francis’ birthday party?” he asked them. “After a moment of bewilderment and wonder, they started packing up their beds, pieces of cardboard and covers which were arranged to protect them from the bitter cold of the Roman night.”

They put their things into Krajewski’s car and headed to meet the pope, with the dog riding front and center. They joined Francis and his staff of residence for Mass and a birthday breakfast.

One of the men told Francis, “It’s worth being a tramp because you are received by the pope.”

2 thoughts on “Pope Celebrates Birthday With Homeless Men and Dog”