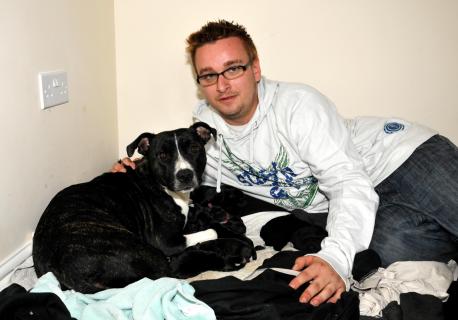 Simon Spalding was sound asleep in his apartment last Saturday and completely unaware of the dangerous fire in his hallway. His smoke detector wasn’t working, but thankfully his dog Tipsy was there to alert him and save his life.

Around 2:40 a.m. Tipsy started nudging, licking and barking at Spalding to wake him up. Spalding had no idea the danger he was in when he woke up.

“When I woke up, I didn’t know what was going on. I could just see a light coming from the hall and it wasn’t until I opened the door that I realized the flat was on fire.”

The hallway was engulfed in flames and Spalding was unable to reach his front door, so he and Tipsy made their way out the back of the apartment and alerted neighbors who called for help. Spalding lost most of his belongings in the fire and is currently staying with friends. He knows that without Tipsy the outcome would have been very different.

“I have no doubt that Tipsy saved my life. If it hadn’t been for what she did, I probably wouldn’t have woken up. The fire alarm wasn’t working and none of the neighbors knew the flat was on fire,” said Spalding. “I am incredibly grateful to her. I’ve been getting her lots of her favorite treats.”

Tipsy, who was pregnant at the time of her heroic rescue, gave birth to eight healthy puppies only a few days after the fire.