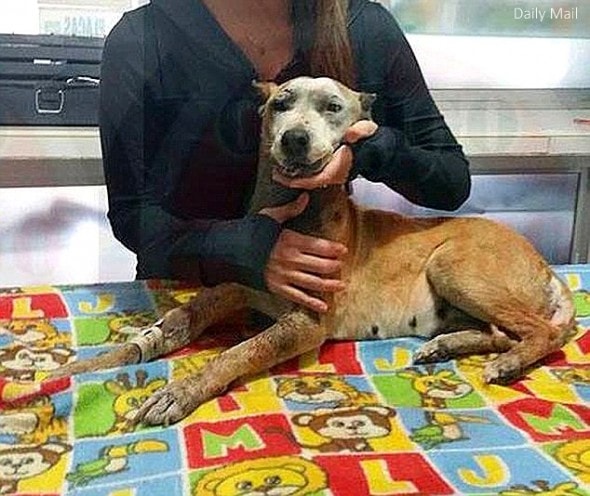 Mexican authorities are searching for the contemptible culprits who taped a firework inside of a pregnant dog’s mouth and lit it.  She has been rescued, and though she is badly injured, will survive thanks to the care of people around her.

This girl – now called Chola – was once a bait dog, as can be seen by the numerous scars she bears.  But she outgrew the usefulness to her captors when she became pregnant, and this reprehensible act is how they chose to do away with her.

“She was very badly hurt,” said veterinarian Miguel Davila. “It looks as if she may survive now but will no longer be able to have a life on the street [of Torreon] and may well still lose the puppies. Many of her injuries such as torn ear are old ones. We believe she was used as bait in dogfights but then became no use when she got pregnant.” 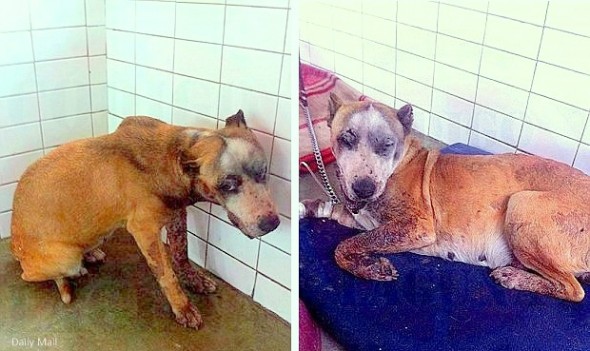 Chola has suffered greatly.  Her jaw has been shattered and several of her teeth were blown out.  Fortunately the blast did not affect her lungs.  But treatment is difficult, because she is incredibly fearful of people.

“We are avoiding as much contact with her as possible as she is extremely nervous of anybody that she doesn’t know well,” said Animal Protection Association director Rebecca Reyes. “She cannot swallow any food because her palate was burnt badly together with her tongue and so we have to feed her baby food liquidized. She also needs painkillers constantly and unless is tranquilized does not allow herself to be examined.”

The Animal Protection Association is collecting donations for Chola’s care as well as a reward for the person who identifies her abusers.  However, this writer has been unable to find a website or address for the APA to allow animal lovers to do so.  If you are able to find anything, please let us know!