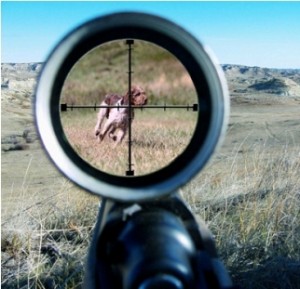 Utah animal lovers are encouraged to keep pets secured and close to home. Republican Representative Curt Oda (R-Clearfield) has sponsored a new bill (H.B. 210) that would legalize “the humane shooting or killing of an animal if the person doing the shooting or killing has a reasonable belief that the animal is a feral animal.” The proposed legislation also allows for the use of a bow and arrow, shooting, clubbing or decapitating animals believed to be feral. Oda considers humane options (such as trapping and relocation) too costly and inefficient.

Opponents are quick to point out the obvious.

“The public is not trained to determine what a feral animal is,” said Utah Humane Society executive director Gene Baierschmidt. “By appearance it may not be feral. For a cat, if it’s not nice, it may just be an old cat.” Baierschmidt’s concern is that animals at large could be subject to wide scale, indiscriminate killings. “There’s going to be situations where people could be killing people’s pets and not even realizing it,” he said. “It just gives a lot of leeway and opens the door for a lot of abuse to take place.”

Clearfield City Police Department is actively investigating several threats that have been directed at Oda in reference to his sponsorship of H.B. 210. The threats have been received through e-mail communication with Representative Oda in the last few days, according to a press release from Clearfield Police Sergeant Kyle Jeffries.

Those opposed to the new legislation are encouraged to sign a petition at change.org.