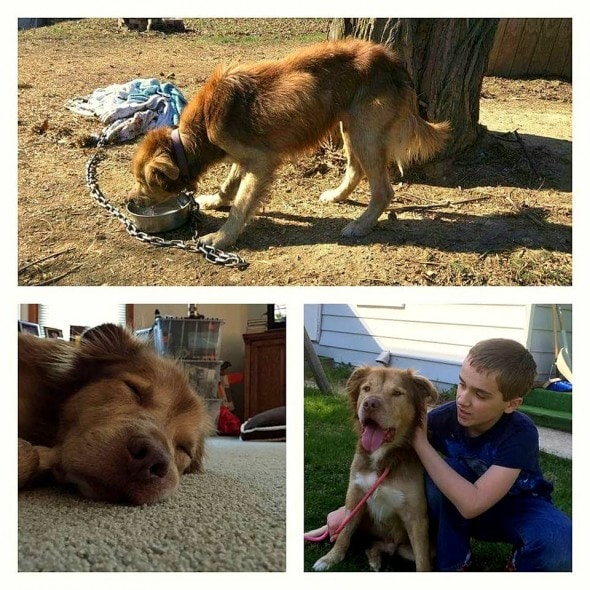 About two months ago, we told you about Duke, the dog who spent his life on a chain but was saved by Speranza Animal Rescue.   We’re pleased to bring you an update: he has been adopted and is now helping a little boy with Asperger’s Syndrome!

This comes from Speranza:

Duke came to us over the winter from Harrisburg. His whole life was spent on a chain.

The car ride home that night I couldn’t help but notice the sadness and confusion in his eyes. He was a dog that you could tell never really knew what it was like to be loved.

Over the next weeks and months our boy stole the hearts of many. He became one of the volunteers’ favorites and the definition of the perfect event dog.

A woman happened to stop by an event we had at the Whimsical Poppy two weeks ago. Her husband had been wanting a dog for 22 years, however the woman didn’t think the same – until she met Duke.

The whole family came out the next day to the rescue and they all fell in love with our boy – and the feeling on Duke’s end was the same.

While our sweet floppy eared pup connected with all of them, he was especially drawn to their 9-year-old son, who has Asperger’s syndrome.

Duke left a few days later to join the family he never had – but always deserved.

The father said that he had become not just the perfect match for their family, but he has helped his son so much.  When he and Duke are together, you can just see the stress leave from the boy’s face. They have truly become best friends.

We are so thrilled for you Dookie. And we are beyond proud. Congrats on your happily ever after. ♡

If you live in the Pennsylvania area and would like to adopt one of Speranza’s many awesome dogs, click here.