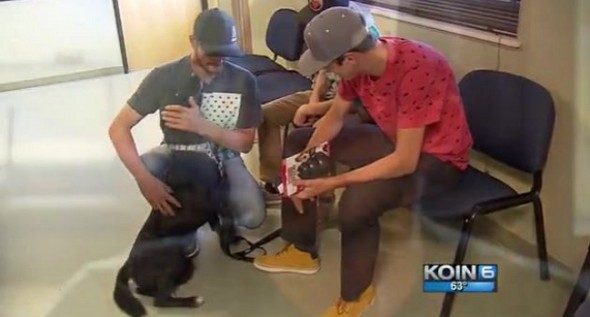 Firefighter William Jones and his dog Hunter were reunited Wednesday, after the dog, who had been kept by friends while Jones was gone fighting wildfires, ran away.  The Human Society of Southwestern Washington took in the dog, who was not microchipped, and after waiting the obligatory period for the owner to come forward, adopted Hunter out to another family.

Jones took to Facebook to plead for Hunter’s return and everything fell into place, the family agreeing to return him.  Jones said that he had just bought Hunter a new kennel that he had yet to put together when called into work at 2 a.m. one morning.  Learning of Hunter’s disappearance, then finding out he had been found, only to be adopted out to another family, had been crushing, and concerns were expressed across a variety of media to see the dog returned to the young man.

As shared in KOIN News’ report, much of this situation could have been avoided had Hunter been microchipped in the first place.  In an effort to make sure people in the community are getting their pets microchipped, inspired by Hunter’s experience, HSSW is creating a new program to support that initiative.